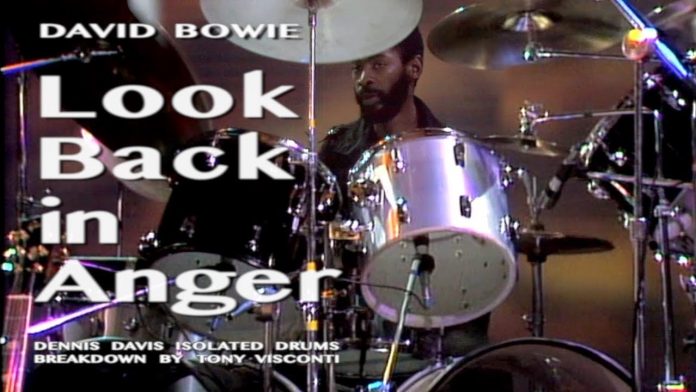 The HD Projects is very proud to present the first in a series of video’s featuring our interview with world-famous music producer, Tony Visconti.

The interview took place in 2018. Tony generously and comprehensively answered our questions. He provided a lot of information and insight into the music he and David Bowie made, and the times they shared with drummer Dennis Davis.

As part of the interview, Tony provided some unique Bowie track breakdowns, to illustrate how important Dennis Davis drumming was to the sound of Bowie’s groundbreaking late 70’s music.

One such was of Look Back in Anger – the classic Bowie rocker from his 1979 album, Lodger. It is a track dominated by Dennis Davis’ drums, and is rightly regarded as one Dennis’ signature tracks with Bowie.

Dennis’ drum tracks for Lodger were in all likelihood recorded at Mountain Studios in Switzerland, in September 1978, during the break in Bowie’s Isolar II World Tour.

On Tony’s breakdown for The HD Projects, vocals and lead instruments are stripped away to fully reveal the drumming, and a previously unidentified Dennis Davis conga drum track, subtly hidden in the mix.

In places, elements of the original track, including Bowie’s vocal, have been mixed back to add context and enjoyment to the video.