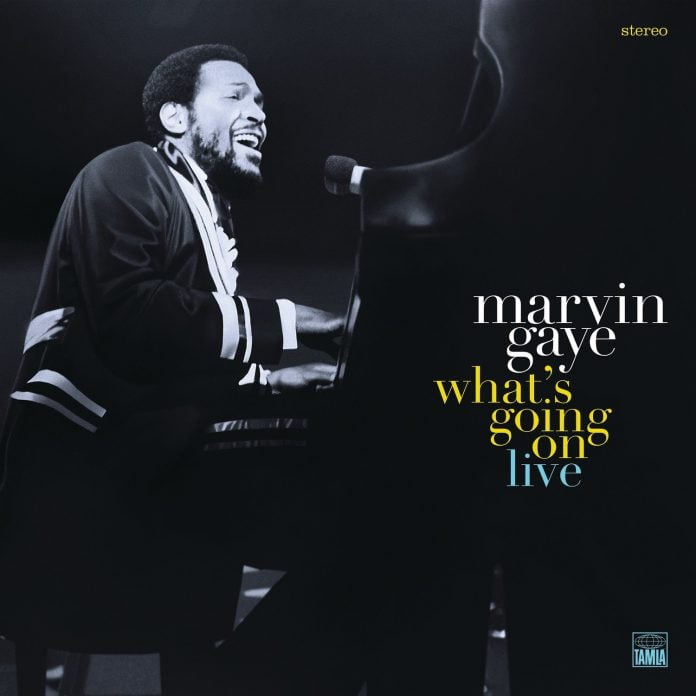 May 1, 1972 was a whirlwind day of celebration in Marvin Gaye’s hometown of Washington, D.C. Designated “Marvin Gaye Day,” it began with Gaye giving a speech to students at Cardozo High, the school he’d attended, before he and his parents were ushered by motorcade to other points around the city. They visited the office of D.C.’s mayor, Walter Washington, who presented Gaye with a key to the city. A VIP reception followed at the U.S. House of Representatives’ Rayburn House Office Building, before the evening’s hotly anticipated main event at the Kennedy Center: Marvin Gaye’s first live performance in four years. After opening acts and onstage testimonials by others, Gaye finally took the stage at around 11pm.

The legendary concert – Marvin Gaye’s only live performance of his iconic 1971 What’s Going On album in full – was recorded. After being shelved for decades, the recording was eventually released on CD in 2001 within Motown/UMe’s expanded deluxe edition for Gaye’s What’s Going On album. Never before issued on vinyl or as a standalone CD, What’s Going On Live is newly mixed by John Morales at M+M Mix Studios and mastered by Alex Abrash at AA Mastering for its October 18 release. The album is making its vinyl debut in black 2LP and limited turquoise 2LP editions with deluxe gatefold packaging, in addition to CD and standard digital, ADM (Apple Digital Masters), and 96kHz/24-bit HD digital audio editions. The vinyl and CD packages include rare photos from Gaye’s performance and new liner notes by Marvin Gaye biographer David Ritz.

What’s Going On Live includes the only known live recordings of Gaye performing four songs: “That’s The Way Love Is” and “You,” which he opened the D.C. concert with as part of a meditative 13-minute medley; “Right On;” and “Wholy Holy.” Due to an unfortunate lag in switching the first reel-to-reel tape to a second one during the concert, Gaye’s performance of “Mercy Mercy Me” from the What’s Going On album was not successfully recorded.

Gaye did not tour in 1972, and he had not toured in years prior, following the collapse and subsequent tragic death of his singing partner Tammi Terrell. While he was on top of the world with the massive success of What’s Going On, he much preferred the studio to live performance, suffering from acute stage fright throughout his career. That year, his only live shows were the D.C. concert and one other, a brief set in Chicago on September 27, which was filmed and recorded for the Save the Children documentary film.

Years later, Gaye reflected on his “Marvin Gaye Day” experience in Washington, D.C., telling David Ritz, “I understood that I’d been punishing myself by staying away so long. I’d been denying myself love, and that’s one of the most foolish things a man can do. It was certainly the biggest day of my parents’ life. Here they came to Washington in the thirties without a penny, and their son was being honored by the mayor as some sort of hero. At least on this one day I felt like I made Father proud.”

What’s Going On Live’s extended time spent unreleased parallels the long-delayed release of another shelved Marvin Gaye project from 1972. The Kennedy Center concert was recorded just as Gaye’s new single, “You’re The Man,” was released, but he did not perform the song in his set. E

SIDE 1
1. Sixties Medley 13:16
That’s The Way Love Is / You / I Heard It Through The Grapevine / Little Darling (I Need You) / You’re All I Need To Get By / Ain’t Nothing Like The Real Thing / Your Precious Love / Pride And Joy / Stubborn Kind Of Fellow