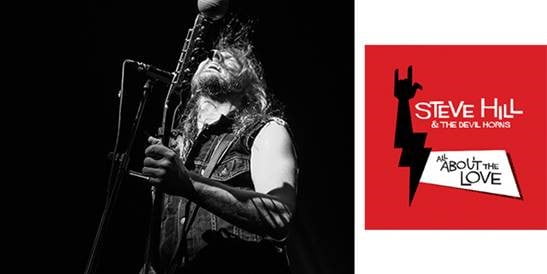 JUNO and multi-Maple Blues Award winner Steve Hill is “All About The Love” on this day that is very much about the same thing.

Under the newly minted guise of Steve Hill & The Devil Horns, the rollicking musical mashup of 70s rock mixed with 60s Gospel and Soul is an unexpected hear-to-believe moment in Hill’s extensive library of song craft — and a glimpse into Hill’s forthcoming new album release this year.

“It’s basically a mix of two styles that aren’t really supposed to fit together in the same song,” he says. “Somehow, though… It works.”

Beyond the wildly surprising juxtaposition of genres, the song’s origin story continues with case after case of self-admitted near-misses and thank-goodnesses.

“I had these two ideas — the verse part and the chorus part — in two unfinished songs,” Hill recalls. “The lyrics for the chorus were written in my notebook for a few months before I put them to music, live on stage, one night in Italy in the spring of 2019. It came out exactly like it is, and it’s a good thing my sound man recorded the show, or I may not have remembered it!

“The guitar riff came out of the blue, too,” he continues. “A friend of mine was visiting me in the studio and, while we were talking, I started playing that riff exactly the way it is now.

“Again… It’s a good thing the tape was rolling!”

When it comes to one-man bands, Hill has no limits, as seen in additional releases The One Man Blues Rock Band, Solo Recordings, Vol. 3, and Domino, as well as on stages for some of the country’s biggest music festivals, including the Montreal Jazz Festival, Ottawa Blues Festival, Mont Tremblant International Blues Festival, Thunder Bay Blues Festival, Kitchener Blues Festival, and more.

In terms of 2020’s addition of The Devil Horns, Hill tells it best: “I had been thinking about trying something with horns for a little while to add some texture and power to my one-man band. I had come up with a band name a few months before — Steve Hill & The Devil Horns — which I thought was pretty cool and funny… I just needed the actual horns!

“I was listening to Queen a lot at the time and their song ‘Dragon Attack’ was the inspiration for the call and response on ‘All About The Love.’ It set the whole mood of the verses. That summer, I got together with my songwriting partner of over 20 years, Joshua Parley, to finish the lyrics, and it all came together.

“I wrote it about a special person but could see right away it could be perceived about a more universal love, too. Lyrics mean so many different things to different people, that I try not to explain them too much.

“For recording, I had a day off in Lyon, France, while on tour in the fall of 2019, which is also the home of fellow one-man band They Call Me Rico.

“Rico and I had our first band together as teenagers 30 years ago, and have been close friends ever since; he also owns Magneto Studio, so I asked him to produce the track and put a horn section together. The whole thing came together in a day, and there’s an energy to the performance that is usually very hard to reproduce in the studio. The fact I had been on tour for three weeks and playing every night really helped.

“All About The Love” is available now.