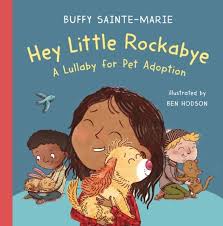 Vancouver, BC— Buffy Sainte-Marie, the internationally-celebrated singer-songwriter, performer, and activist, whose long list of accolades include an Academy Award, Golden Globe, Polaris Music Prize, multiple JUNO Awards, and the Order of Canada, will launch her debut children’s picture book, which celebrates animal rescue and pet adoption, on May 12, 2020. The book shares lyrics from a new song that Sainte-Marie will release to coincide with the book’s publication.

Hey Little Rockabye: A Lullaby for Pet Adoption, published by Greystone Kids and illustrated by Ben Hodson, is a touching picture book for kids ages 3-7 and is based on a song that Sainte-Marie created to welcome her rescue animals home when they first arrived from the shelter. “No matter what kind of animal your little rockabye pet is,” says Sainte-Marie, “I hope my song will make you feel loving and cozy together and fill you both with special joy.”

Like much of Sainte-Marie’s powerful work, her children’s book shares an inspiring message of love and support for some of society’s most vulnerable, making it a pertinent addition to her oeuvre and an essential piece of art for fans and their loved ones to cherish. With Hodson’s vibrant illustrations, the story follows a girl and her family as they consider pet adoption. Sheet music included at the back of the book teaches readers to sing along.

There are many sides to Buffy Sainte-Marie—including her past work educating children on Sesame Street, her music and activism, and her passion for animal rescue. Hey Little Rockabye showcases them all in one remarkable picture book, which will be read—and sung—for years to come.

Pet adoption is an important cause to Sainte-Marie, whose own rescue animals have included cats, dogs, a horse, and over thirty goats. Photos of her animals feature in the picture book.

Sainte-Marie is no stranger to creating content for children. As a cast member on Sesame Street from 1976 to 1981, this cultural icon taught viewers about Indigenous culture and was the first woman to breastfeed on television.

The acclaimed singer-songwriter has a long history of politically and socially conscious anthems and outspoken activism for the rights of Indigenous peoples in North America, which is documented in her authorized biography, Buffy Sainte-Marie, by Andrea Warner. A prolific artist, Sainte-Marie began writing and performing her music in the 1960s and has released nearly 20 albums in her decades-long career. Her material has been covered and/or recorded by everyone from Elvis Presley and Janis Joplin to Courtney Love and First Aid Kit.