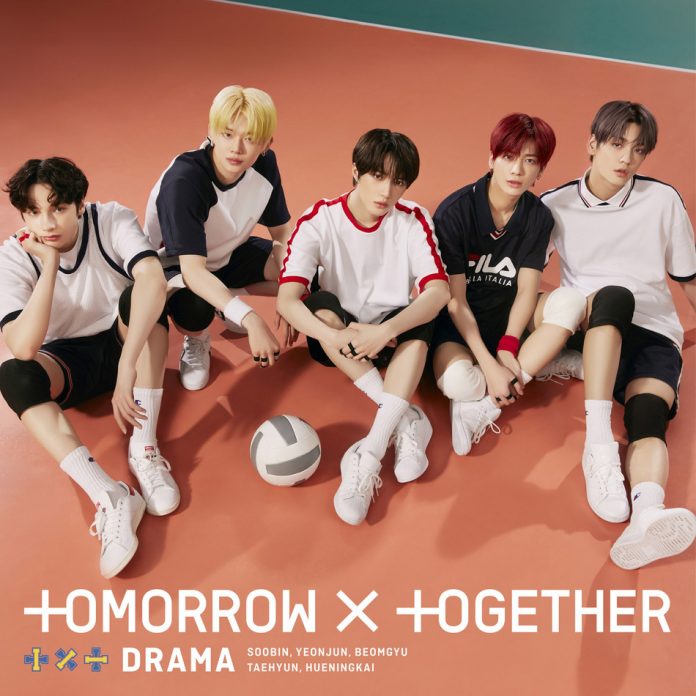 TOMORROW X TOGETHER (SOOBIN, YEONJUN, BEOMGYU, TAEHYUN and HUENINGKAI) will release DRAMA on September 25, 2020 on CD in the U.S. via UMe. Watch trailer, HERE. Pre-order, HERE.

TOMORROW X TOGETHER read as ‘tomorrow by together’, has come together under one dream in hopes of building a new tomorrow. Composed of five members, SOOBIN, YEONJUN, BEOMGYU, TAEHYUN and HUENINGKAI, the band is full of bright and playful energy, where each member is different from one another, shining in their own way to create synergy. In just two months of their debut, TOMORROW X TOGETHER successfully sold out their first US showcase tour in 6 cities with their debut album, The Dream Chapter: STAR. Emerging as one of K-pop’s most highly acclaimed acts, the global super rookies have already cultivated Best New Artist accolades on various award shows and received nomination in 2019&2020 MTV Video Music Awards’ Best K-Pop category.

Their new original song, “Everlasting Shine,” will be the opening theme on the animation series, “Black Clover” starting Sept. 1. “Black Clover” (subtitled) is available on crunchyroll.com, FUNimation (dubbed version with a 2 week delay) and on the Cartoon Network (dubbed) two months from its original air date in Japan.

Their Korean 2nd mini-album Dream Chapter: ETERNITY, which was released globally in May, topped the charts at No.1 on iTunes “Top Album” chart in 50 territories including U.S., Canada, Mexico, Brazil, France, Holland, Russia, India, and Japan and went No. 1 on Oricon Daily Album chart and Oricon Weekly album chart.

TOMORROW X TOGETHER made their debut in March last year and has proved themselves as global super rookies leading the K-Pop scene, claiming 10 Rookie Awards and a nomination for the 2019 & 2020 MTV Video Music Awards. Watched and recognized for their high-quality content and impeccable performances, TOMORROW X TOGETHER is once again prepared to take the world by storm.

CD Tracklisting (for all configurations):