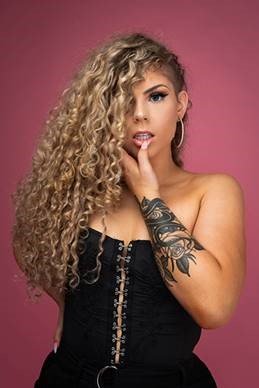 Top 100 2020 CBC Searchlight finalist Alexis Lynn sets forth a declaration of sorts, surrendering to love and floating away in her “Bubble” — available now.

The Canadian urban pop dynamo’s third single of the year lands after “Circles” and “I Can’t Relate,” and is the latest in a series to follow 2019’s breakthrough debut, Things Get Good. The seven-track release — and each single thereafter — radiates the First Nations artist’s inimitable, imaginative musical magnetism as her signature songwriting continues to delve deep into topics of love, lust, vulnerability, self-awareness, and everything in between.

“It’s about being a closed-in, protective person and finally deciding to let someone in,” Alexis Lynn shares about “Bubble.” “It’s about the fear — and also the exhilaration — of letting someone into your world and being afraid they might pull the rug out from under you. It’s about letting yourself be vulnerable despite knowing that, once you let that person in, they have the power to break your heart or burst your bubble.

“I’m definitely that kind of person,” she confides. “It’s terrifying to let someone so close to you — especially in a relationship.”

One spin of the song and stream of the video show Alexis Lynn vision for the track’s dream-like, floaty vibe was brought to life both sonically and visually; “When I listen to it, I feel like I’m actually floating inside a big pink bubble, and for the video, I felt like I was living my bubblegum fantasy filming it.”

The video ushers audiences through the various layers of a new relationship, with each being inside their own little world — or bubble — she says. “Right from the start, I had this vision of being in a giant plastic bubble, and who knew you could get one on Amazon! The video moves through the ‘honeymoon stages’ of dating, being intimate, learning the other person, and then the genuine comfortability.”