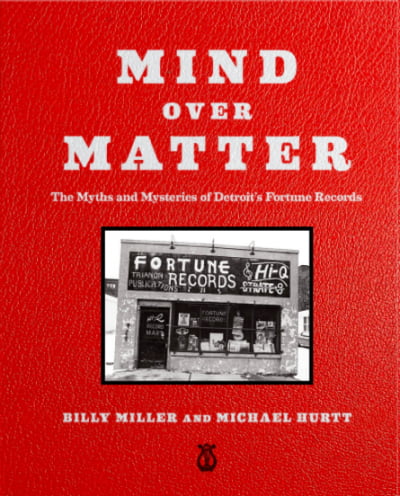 Lenny Kaye, guitarist, composer, writer, and member of the Patti Smith group, has always been inspired by Detroit’s Fortune Records, a family-owned forerunner of Motown that laid the groundwork for the celebrated musical legacy of the Motor City. Lenny has written the introduction to the fascinating story of this eccentric independent imprint that is finally being told in the new book, Mind Over Matter: The Myths and Mysteries of Detroit’s Fortune Records, wherein authors Billy Miller and Michael Hurtt leave no stone unturned in chasing down the wild tales behind some of the coolest music that you may have never heard.

A virtual alternate history of early rock ’n’ roll, country, R&B and soul, Lenny Kaye wrote the foreword for this incredible book, and I wanted to share a little summary of what you will find in Mind Over Matter, in addition to the 576 pages of previously unrevealed history, unseen photographs and original, from-the-street interviews with those who cast Fortune into legend.

Although their label was a “mom and pop outfit” that ran on “faith’ in a run-down neighborhood in Detroit, according to Lenny Kaye, Jack and Devora Brown created a business that continues to inspire to this day. Their tiny record store with a small studio tucked behind the back shelving was the home to a diverse roster of blues, rockabilly, gospel, Gypsy, polka, bluegrass, jazz and doo-wop musicians that came to Fortune to hear themselves on record and unwittingly created a multicultural musical time capsule of a great American city in the arc of its rise and fall.

Lenny writes of the recording process at Fortune: “It was about as live as you could get, the drums and guitars scattering off cinder block walls; the singers in tight, no headphones, close enough to hear each other.” Word quickly spread about the Browns’ “open door policy” and school kids, both black and white, would come to hang out and record at Fortune. The sense of family created by Jack and Devora attracted names like Andre Williams, Nathaniel Mayer, and Nolan Strong, whose 1962 hit song “Mind Over Matter” reached number one in Detroit before Fortune ran out of “promotional muscle.”

Fortune slowly dissolved in the wake of the British Invasion, the rise of Motown and the social unrest of 1967. After a 1973 car accident crippled Jack physically and scattered Devora mentally, the Brown children took over but according to Lenny, “their faith couldn’t sustain them.” What’s left is a mesmerizing discography intertwined with the compelling account of a family business that began and survived against all odds and what has been called “the greatest history of failure in all of post-war pop music.” The story of this close-knit, one-of-a-kind cinder block setup and its astounding array of artists is now being told for the first time under the title of one of Fortune’s biggest hits — and the phrase that could very well have served as the Browns’ motto — “Mind Over Matter.”