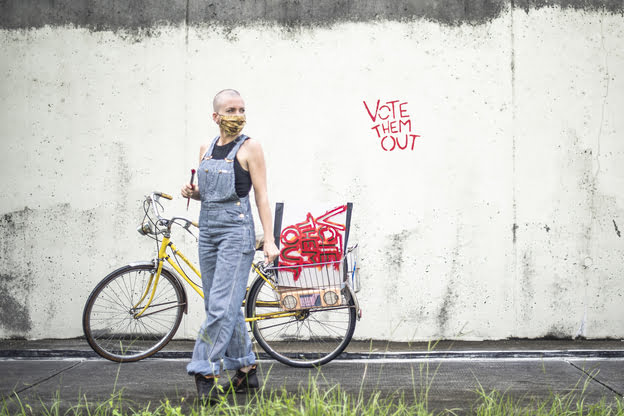 oday, singer/songwriter/feminist/activist/author DIY icon Ani DiFranco releases “Do or Die,” a poignant statement about our society as we head into a landmark election. The lead single from DiFranco stays true to what she started nearly thirty years ago, speaking truth to power. With “Do or Die” DiFranco implores her fellow citizens to vote to maintain democracy during these historically unprecedented times. Vote like our lives depend on it, because they do. DiFranco came out of isolation during Covid to record “Do or Die” with talented musicians Brad Cook, Phil Cook, Brevan Hampden, Matt Douglas and Van Westerland in Durham NC. Later her touring partners Terence Higgins and Todd Sickafoose added finishing touches to the track. DiFranco created the “Do or Die” video in collaboration with Dancing Grounds and New Orleans Dance Collective, local organizations in her residence of New Orleans.

About “Do or Die,” DiFranco says, “Nothing will stem the tide of suffering from COVID-19, economic crisis, police brutality, mass incarceration, endemic poverty, entrenched white supremacy and misogyny, deportation and detainment, gun violence, fire, flood, disease, pollution, irradiation, exploitation, forced reproduction, gender and sexuality-based violence and oppression, dis-information, propaganda, corruption, and greed… short of a functioning democracy! Let’s harness our outrage and vote. We can do this, if we try, if we do this like it’s do or die.”

Widely considered a feminist icon, Grammy winner Ani DiFranco is the mother of the DIY movement, being one of the first artists to create her own record label in 1990. While she has been known as the “Little Folksinger,” her music has embraced punk, funk, hip hop, jazz, soul, electronica and even more distant sounds. Her collaborators have included everyone from Utah Phillips to legendary R&B saxophonist Maceo Parker to Prince. She has shared stages with Bob Dylan, Bruce Springsteen, Pete Seeger, Kris Kristofferson, Greg Brown, Billy Bragg, Michael Franti, Chuck D., and many more. Her last studio album Binary was released in June 2017 on Righteous Babe Records. Her memoir No Walls and the Recurring Dream was released in May 2019, and DiFranco released a No Walls Mixtape alongside the book, offering a new take on songs related to the memoir.