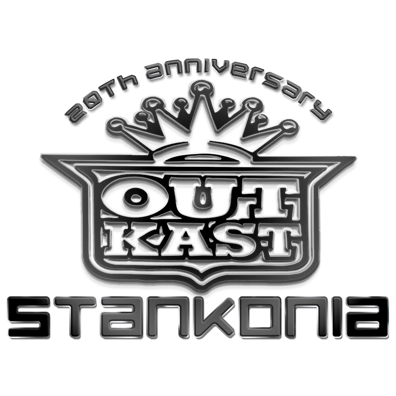 This Is Certified, Legacy Recordings’ division for the celebration of Sony Music’s Hip Hop and R&B catalog, is commemorating the 20th anniversary of Stankonia, OutKast’s game-changing Hip Hop masterpiece, with a month-long October campaign leading up to the release of the album’s newly certified RIAA platinum hit singles–“B.O.B. (Bombs Over Baghdad),” “Ms. Jackson” (3x platinum) and “So Fresh, So Clean”–in new bundles on all DSPs on Friday, October 30. Each song comes bundled with instrumental, A cappella and remixed versions in state-of-the-art 16 Bit sound.

Each of Stankonia’s singles will be available for the first time in its own digital bundle, all-new to DSPs. The “B.O.B. (Bombs Over Baghdad)” bundle features three previously unreleased remixes: Cutmaster Swiff Remix, Zack de la Rocha (Rage Against The Machine) Remix and Beat Bullies Remix.

Stankonia, the album, will be available digitally in 24 Bit and 360 Reality Audio on October 30. The newly-expanded version presents the original album in its entirety plus six bonus tracks: the Mr. Drunk Remix of “Ms. Jackson,” the Stankonia Remix of “So Fresh, So Clean” (featuring Snoop Dogg & Sleepy Brown), and the Zack de la Rocha Remix of “B.O.B. (Bombs Over Baghdad)” (previously unreleased) in addition to OutKast’s A cappella renditions of those three songs.

Vinyl Me, Please, the “best damn record club out there,” in association with SME/Certified/Legacy, will release a collectible 20th Anniversary 2LP edition of Stankonia pressed on 12″ black and white galaxy vinyl. Stankonia will be available to VMP members as the club’s “Record of the Month” for October 2020 and includes an exclusive art print.

Featuring tracks recorded 1999-2000 in Atlanta’s Stankonia Recording and A&M Studios in Los Angeles, OutKast’s Stankonia was originally released through LaFace/Arista Records on Halloween 2000. For the group’s fourth studio album, their first in the 21st century/new millennium, American Hip Hop duo OutKast–André 3000 and Big Boi–expanded their musical and performance aesthetics to incorporate elements of funk, electronica, psychedelia, gospel, rock and rave culture into a new integrated sound rooted in the Deep South while reaching into the future. One of those rare records that defines its era while projecting a vision ahead of its time, Stankonia is nothing less than a sonic state-of-mind, a portal into another world, a new way of being. “Stankonia,” said André 3000, “is this place I imagined where you can open yourself up and be free to express anything.”

The boundless freedom André 3000 and Big Boi deployed on Stankonia manifested a wide range of lyrical content–songs addressed sexuality, politics, Black culture, parenthood and personal reflection–while the music was both grounded and out-of-this-world, a singular combination of the carnal, the ethereal and the spiritual, wrapped in wit, compassion and soul. Stankonia raised the bar and rewrote the rules for 21st popular music. Widely regarded as one of the greatest albums in Hip Hop history, Stankonia sold more than 530,000 copies the week of its release and debuted at #2 on the Billboard 200. The album generated three hit singles, with “Ms. Jackson” becoming the first OutKast single to peak at #1 on the Billboard Hot 100. Stankonia won Best Rap Album at the 2002 Grammy Awards while “Ms. Jackson” took home the Grammy for Best Rap Performance by a Duo or Group. Most recently, Stankonia came in at #64 on Rolling Stone’s new edition of The 500 Greatest Albums of All Time.

The videos for “B.O.B. (Bombs Over Baghdad),” “Ms. Jackson” and “So Fresh, So Clean” will be upgraded to high-resolution HD while each of the singles has been certified RIAA platinum, with “Ms. Jackson” reaching 3x platinum territory as of October 8.