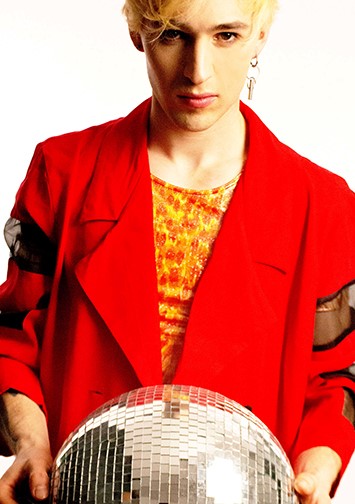 “Gimme More Bass is one of those songs that kind of surprised me,” Cassara shares. “It happened so quickly; at the beginning it was just a melody that was really catchy and it felt like in the blink of an eye it came to life.

As for the album, its title alone telegraphs Cassara’s determination to blaze his own path and encourage others to do the same. “Freak on Repeat is actually a line from one of the songs, ‘Bad Bad,’ and I think it describes this record authentically. It’s about having the best time you can have, being yourself and having fun in the moment.”

Similarly, “My Love Again” deals with the lingering feeling that although something’s ended, a new start may be possible. “That’s also a real story,” Cassara says. “It’s a message that, rather than send directly to someone, I wrote into a song.”

“This is probably one of my all-time favourite songs I’ve written to this very day,” Cassara shares of the album’s most recent single and video, “Shock.” “I’m always pushing myself to try writing and singing what feels right for the song while also pushing myself out of my comfort zone to try something new.

“When I was writing it,” he continues, “funnily enough I couldn’t help but picture myself in the movie Grease in the role of ‘Danny’ singing this song… It’s a feel-good song, and it’s a creation I want people to get off their feet for, to dance to and have the time of their life with.

Describing Canadian pop dynamo Andrew Cassara’s style in words doesn’t do it justice; hearing and feeling his music are really the only ways to fully appreciate the 24-year-old’s singular blend of funk, disco and pop. Fuelled by influences ranging from Shawn Mendes, to the Bee Gees, to artists like Jamiroquai – who, like Cassara, blur stylistic lines fluidly – both “Shock” and Freak on Repeat (SGMGroupArtists), may sound familiar, but are absolutely impossible to pigeonhole.

That said, Cassara’s insistence on replacing negatives with positives and his desire to lift people up permeates every tune on Freak on Repeat and is summed up handily with the stand-out album closer, “Stay Rockin.” “That’s my motto,” Cassara says; his way of dealing with whatever life throws his way. “And putting it at the end of the record, I think, ties the whole album together.”