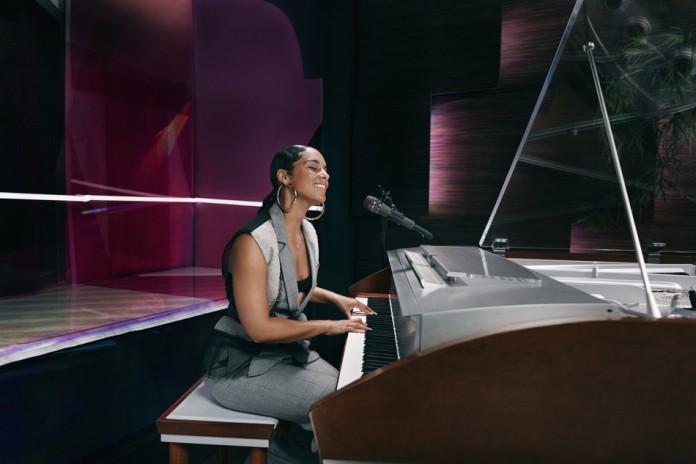 MasterClass, the streaming platform where anyone can learn from the world’s best across a wide range of subjects, today announced that 15-time Grammy Award-winning artist Alicia Keys will teach a class on songwriting and producing. For the first time ever, Keys will not only reveal her complete approach to songwriting but also share her inspiring philosophies on how to unlock authenticity, empathy and vulnerability. Keys’ class is now available exclusively on MasterClass, where subscribers get unlimited access to all 90+ instructors with an annual membership.

Designed for artists of all levels, Keys’ MasterClass will share her rare and valuable insight into songwriting with soul. Within the intimate setting of her personal studio, Keys will take members through her entire process, starting with developing lyrics at the piano in the Live Room, recording and layering vocals in the Iso Booth, and finally, arranging sonics in the Control Room. Breaking down the anatomy of her many anthemic tracks, she explains the various influences and elements that come together to create her signature authentic and retro-futuristic sound, including how she harnesses the power of specific vocal arrangements and experiments with instruments and software. Fans will appreciate her rare deconstruction of the creative process behind one of her most iconic hits, “Fallin’.” Keys will also go beyond her technical skills to discuss her take on inequalities in the music industry and how she’s creating more space at the table for those whose voices are silenced. Offering a rare look at the wealth of knowledge and experience behind her monumental career, her class will empower members to define their purpose, channel their empathy and find their authentic rhythm.

“I cannot stress enough the power you have when you’re truly confident in yourself,” said Keys. “In my MasterClass, I’m excited to connect on a different level. We’re gonna talk about what I’ve learned, my process and how to access what’s inside of you, so you can connect and get it out into the world.”

A talented performer from a young age, Keys scored her first No. 1 hit in 2001 with “Fallin’,” which was featured on her debut album, Songs in A Minor, and landed her her first five Grammy Awards, including those for Song of the Year and Best New Artist. She’s released six more critically acclaimed studio albums since her debut: The Diary of Alicia Keys (2003), As I Am (2007), The Element of Freedom (2009), Girl on Fire (2012), Here (2016) and, most recently, Alicia (2020). As one of the most influential songwriter-performers of the last two decades, Keys has been honored with countless awards, including 15 Grammy Awards, 17 NAACP Image Awards, nine Billboard Music Awards, five American Music Awards and seven BET Awards, as well as the Starlight Award by the Songwriters Hall of Fame. In addition to her singing career, Keys is also acclaimed for her humanitarian work, philanthropy and activism. At just 22 years old, she co-founded and serves as the global ambassador of the nonprofit HIV/AIDS-fighting organization Keep a Child Alive; she launched the We Are Here Movement, a petition to demand racial justice and equality; and in 2018, Keys formed She Is the Music, a music-industry group for female advancement.