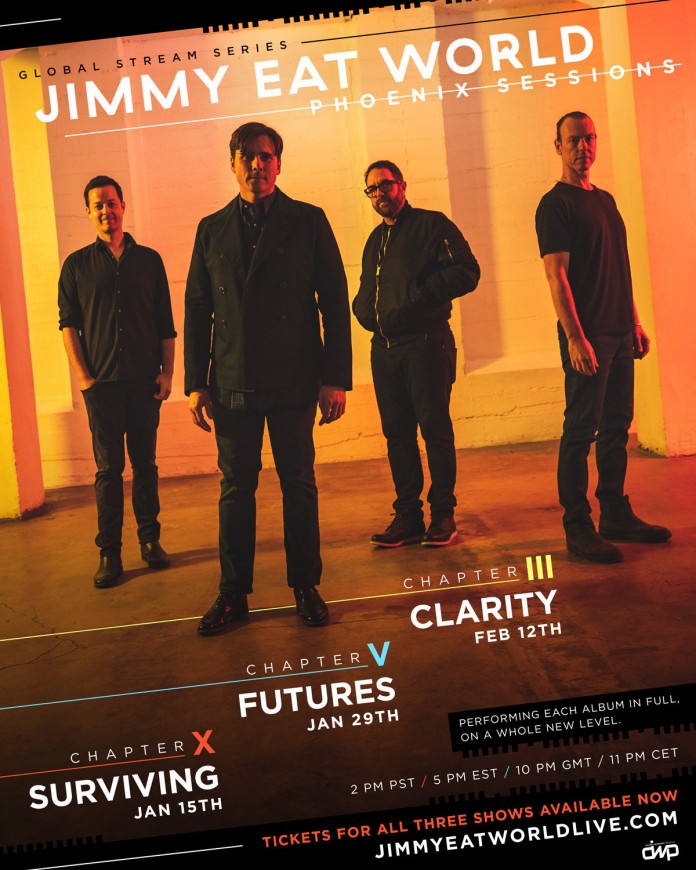 On January 15th, critically acclaimed alternative rock band Jimmy Eat World will launch their Phoenix Sessions, a global stream performance series in partnership with Danny Wimmer Presents. The band will come together for one-of-a-kind performances of three “chapters” in their storied career. Beginning January 15th with a performance of their 10th studio album Surviving (Chapter X), which has only been seen live by the lucky fans who made it to the shows last October, followed by Futures (Chapter V) on January 29th and Clarity (Chapter III) on February 12th.

Tickets for these events are on sale now and can be purchased as a single show or in a three-pack bundle. From now until January 14th, $1 from every purchase will be donated to NIVA (National Independent Venue Association) Emergency Relief Fund. Early bird pricing for the 3-show Mesa Tickets and Bundles, as well as Surviving Tickets and Bundles, ends on January 10th at 11:59 PM ET before increasing to week of show pricing. Other bundles, merchandise and VIP meet and greets are available at a variety of price levels. A la carte merch items go on sale Monday, January 11. For more information on tickets and bundles, please visit: JimmyEatWorldLive.com.

Recorded at the Icehouse in Phoenix, AZ, the virtual events will feature the band performing each album in its entirety for a full concert experience. Each show will start at 2pm PST / 5pm EST / 10pm GMT / 11pm CET and will be available on demand for 72 hours post stream at JimmyEatWorldLive.com.

“We are always looking for ways to challenge ourselves, to do things as music fans that we think would be cool for OUR fans. We came up with the idea of presenting a series of concert films centered around a few specific albums (for now) and performing them on a different level. It isn’t the way we normally play a show and it’s definitely something new for how we approach a performance, but we haven’t been able to share the experience with our fans in over a year… so here we go!” – Jim Adkins