An ambitious project is underway in Rome to rebuild the Colosseum floor that will help restore the famous building’s ground level to its Roman empire, gladiator-era days.

The Italian government has earmarked €10 million for the winning bid as design and architectural firms get to work on concepts for a new retractable floor. The deadline to submit the designs is February 1, with plans to complete the renovation by 2023.

Not only will the new retractable floor allow visitors the opportunity to experience the Colosseum from the viewpoint of the gladiators, there are also grand plans to use the venue for concerts and theatre shows.

“We want to give an idea of how it was, and we are seeking proposals from around the world,” Alfonsina Russo, the director of the Colosseum, told The Times newspaper. “The arena will be used for high culture, meaning concerts or theatre.”

The exciting prospect of attending a concert inside the Colosseum makes you wonder what other iconic locations could be used as entertainment venues, so here are five more that would be incredible. Excluded are religious venues on the basis of them being places of worship. 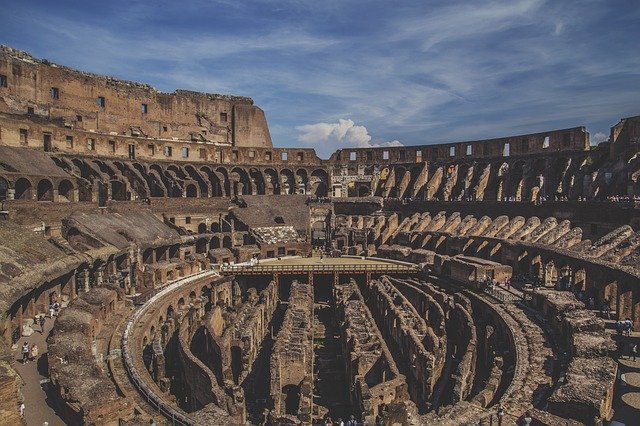 One of the most well-known and recognisable buildings in England, the Gherkin got its nickname from its clearly identifiable shape. Completed in December 2003 and opened in April 2004, the skyscraper stands 180 metres tall and comprises 41 floors. It is considered one of the great pieces of modern architectural design and has won multiple awards.

The Gherkin has twice been sold, with its current owner being Brazilian billionaire Joseph Safra and his Safra Group corporation. As expected, most of the tenants are corporate companies and banking institutions, but if the Gherkin was to be sold again, it would make a fantastic entertainment and hotel complex. With luxury suites and classy wine bars offering the best views of London, plus a casino and a few floors designated to a shopping complex – the Gherkin could be the London equivalent of Singapore’s Marina Bay Sands.

Another famous building known mainly by its nickname, Dancing House in Prague is a deconstructivist structure built between 1992 and 1996. It was designed by Croatian-Czech architect Vlado Milunić and Canadian-American architect Frank Gehry and courted a fair amount of controversy at the time due to its location among more traditional Gothic, Baroque, and Art Nouveau buildings along the Rasin Embankment.

Originally, the nine-storey building consisted of two commercial floors – the lobby and first – and six levels of office space, with a restaurant located on the top floor. Since then, two of the floors have been converted into a hotel, another level is used as an art gallery, and there is a glass bar on the eighth floor.

However, given the unique design of Dancing House, it would be great if it was one day converted completely into a cultural centre with a live music venue. How cool would it be to attend a small, intimate concert inside Dancing House?

Royal Yacht Britannia is one of the most famous, and most visited, tourist attractions in Scotland, with more than 400,000 visitors every year climbing aboard to explore what used to be Queen Elizabeth II’s favourite sea vessel.

Built in 1952 to the Queen’s orders and sailed for more than one million nautical miles, the Britannia was retired in 1996. The stately and luxurious décor remains so visitors can take a glimpse into Royal life. But what else could the Britannia be used for?

Well, given the glamour and prestige of the Royal vessel, it would certainly make an incredible luxury hotel, perhaps with a high-roller casino. Imagine brushing up on the rules of roulette, getting suited and booted, and playing a few spins before retiring to a suite that was once a bedroom of the Royal Family? While such a scenario is unlikely on the Britannia, there is precedent: the QE2 has been transformed into a luxury hotel in Dubai.

The largest palace in the world spanning 720,000 square meters, Forbidden City in Beijing was one of the many residences of Chinese Emperors between 1420 and 1924. Comprising 980 buildings with around 10,000 rooms, Forbidden City has been under the charge of the Palace Museum since 1925 and was made a UNESCO World Heritage Site in 1987 – it is the largest collection of ancient wooden structures anywhere in the world.

The current market value of Forbidden City is thought to be around $70 billion, which makes it the most valuable piece of real estate in the world, and with anywhere between 14 and 19 million annual visitors, it is one of the most visited sites on earth.

Of course, there is no chance Forbidden City would be converted into a giant entertainment complex but thinking in hypotheticals, it would be something quite special.

Bran Castle is a bizarre example of an iconic building being famous for something that, in truth, it had no real association with. Commonly known as the ‘home’ of Dracula, the Romanian castle actually bears little resemblance to author Bram Stoker’s fictitious descriptions and there is little evidence that Stoker even knew anything about Bran Castle.

As it is, the castle attracts millions of tourists who are drawn in by the opportunity to see Dracula’s ‘home’ and the 14th century building is now mainly used as a museum and for guided tours.

This is one place that would make an incredible backdrop for live concerts and music festivals, allowing revellers to get into the Dracula spirit while dancing and singing along to their favourite bands.