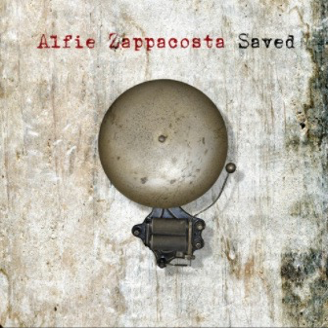 Few recording artists deliver some of their finest work in the fifth decade of their career, but that is clearly the case with Saved, the new solo release from award-winning, platinum selling Alfie Zappacosta, out on Alma/Universal on February 5, 2021, bringing his deep catalogue to 16 albums. Saved will be available on CD, Streaming, Digital + Hi Res Digital Platforms. Pre-order NOW.

The first single, “Saved,” from this gorgeous album comes out on January 8, 2021.

Zappacosta is at the very top of his game here, as a singer, a songwriter and producer. There is that rich soaring voice that has always been his signature, one that, like a fine Amarone Italian red wine, has improved with age, gaining a new degree of resonance evident on Saved.

From soulful and romantic ballads like “Always Near,” “Unspoken,” and “Here In My Heart,” to the gospel-tinged “Saved,” and the upbeat and jazzy “Had Enough” and playful “This Place In Time,” Alfie’s versatile vocals never miss a step.

The diversity of tempos and tones on Saved always keeps things interesting. The songs draw from pop, jazz and rock elements, and reflect Alfie’s current mandate: “I’m a writer and I like to write as many different kinds of songs as I can. Once upon a time, record labels would want you to have a certain style so they knew how to market you, but now I can do anything I want.”

Zappacosta’s passion for music and the urge to be creative were saved by his decision to take full control of his career and his music after surviving the ups and downs of life with a major record label. “For the last six records I’ve made, I realised I had nothing to lose, so I took the bull by the horns. I am very much in control of what I do these days. Now, ‘it’s just shut up and go to work,’ plus I’m completely comfortable with everyone I work with.”

To write and record Saved, Alfie collaborated with a talented group of co-writers and musicians, most of whom he has had a long working relationship with. “Gerry Mosby from Toronto was responsible for many interesting arrangements, and Marco Luciani, Andrew Glover, and Silvio Pupo (a Cuban-Canadian jazz pianist) were involved in the songwriting,” Alfie explains. “Making Saved was in part about getting together with some old friends and reliving good times. There was nothing but good vibes in making this record.”

“I’ve always loved what these people do with songwriting. I didn’t owe anyone anything, but I just thought they were great tunes and I could do them justice in taking their chord progressions and writing melody and lyrics to them. That is what I did with some of these songs.”

Playing a key role in the recording of Saved was fellow Edmontonian Louis Sedmak. “He’s an all-round great musician and a fabulous engineer and mixer too,” Zappacosta explains. “We recorded the album at his fully functional home studio, with Louis engineering.” Sedmak has produced such artists as Ian Tyson, Duane Steele, and Jake Mathews, and is recognised as one of western Canada’s top session guitarists.Sedmak plays on the album, alongside the aforementioned notable musicians as well as Toronto session aces Denis Keldie and Blake Manning.

Alfie Zappacosta describes himself laughingly as “a hopeless romantic,” and that is reflected in much of his writing. He digs deep into his own heart, but then translates those emotions into imaginative literary and philosophical insights.

That is vividly showcased on Saved by “Just Like This,” a tune with deep significance for Alfie. “That is an old favourite I wrote many years ago, before my wife passed away,” he explains. “It is something of an autobiography of me and my wife, about making a relationship work and the moments – just like this – that make it all worthwhile.”

Alfie is also justifiably proud of the title track, which, despite the gospel favour and the title, is not a spiritual. “I’m not a religious character by any means but I am a humanitarian,” he stresses. “’Saved’ is about hoping for the best for people in general, and how if anybody is going to save you it has to be yourself.”

The musicianship on Saved is stellar, with strings, horns, and female backing vocals all used judiciously to add depth and atmosphere to individual tracks, as does the Django-like guitar on “Had Enough,” and muted trumpet on “Unspoken.”

Zappacosta’s solo catalogue has certainly justified the faith shown in naming him Most Promising Artist at the 1988 Juno awards. That year, he won a second Juno, Album of The Year, for his hit second record, A-Z.

That same milestone year brought Alfie multi-platinum success with “Overload,” a song he co-wrote with Marco Luciani and recorded for the soundtrack of the Patrick Swayze movie, Dirty Dancing. That album sold over 42 million copies, and earned Zappacosta an American Music Award.Rather than resting on past laurels, Alfie Zappacosta continues to forge ahead in compelling fashion. He is eager to perform again for his loyal audience in Canada, and beyond. Until then, you are strongly urged to take a listen and get Saved!