Gambling is one of the oldest forms of entertainment around, and humans have been making wagers with one another for millennia to pass the time and perhaps win something in return for taking risks.

In the past century, the rise of casino culture and the subsequent impact it has had on the wider world is difficult to quantify, but taking a look at its specific influence on other parts of the entertainment industry can at least demonstrate how potent and prevalent it has become. To that end, here are some examples of creative niches that have taken cues from gambling and casinos. 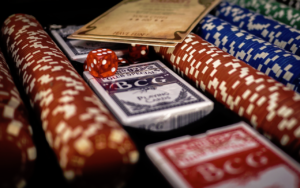 When songwriters are inspired to compose ditties about topics they think will connect with audiences, they usually choose love and loss. It speaks volumes, then, that gambling is a surprisingly rich subgenre of pop music, with hits spanning more than five decades using this theme as their foundation.

Some of the most famous gambling songs are melancholy, like The House of the Rising Sun made famous by The Animals in 1964, while others are upbeat, like Lady Gaga’s 2008 smash Poker Face. Regardless, it is intriguing to see just how frequently gambling is either mentioned in passing or included at the core of chart-topping singles as well as album tracks.

No doubt part of the success of this trend has to be attributed to Elvis Presley, as the King became so closely associated with Las Vegas during his lifetime, as well as writing songs about the city of sin itself, that he paved the way for yet more artists to follow suit.

If pop songs manage to dedicate three minutes to discussing the ins and outs of gambling, the art of cinema is even more capable of delving into this scene, with everything from arthouse flicks to big blockbusters exploring gambling characters as well as the venues and locations that they frequent.

Martin Scorsese has often dabbled in this world, with his 1995 classic Casino giving viewers an impressive overview of what casinos were like during an era when mafia crime families were in charge of most of the major gambling houses in America. The interweaving of drugs, political corruption, extortion and murder with casinos in the mid-20th century makes Las Vegas in particular seem like a totally different place to the tourist-friendly, mainstream image it has managed to develop today.

More recently, the comedy franchise The Hangover put a contemporary twist on casino experiences, focusing on the chaos and hilarity that can ensue when bachelor parties in Vegas get out of hand. While gambling itself was not a dominant part of the plot, it nevertheless helped to revitalize the reputation of Sin City with modern audiences.

There are also myriad films that are more interested in the lives of gamblers themselves. From high-octane, poker-fuelled thrillers like Rounders, to movies based on real card counting gangs like 21, to more melancholic tales like The Cooler and Leaving Las Vegas, some Oscar winning performances have been brought about thanks to the theme of gambling.

The most recently created form of entertainment to have been heavily influenced by gambling is video gaming, and there are both conspicuous and subtle examples of how this impact has been applied.

Most obviously, developers have come up with digital versions of traditional casino games, with even early consoles from the 1970s and 80s being compatible with iterations of poker, roulette and other usually land-based experiences. The rise of online casinos since the 1990s and 2000s has seen virtual slot machines take the lead in terms of popularity and profitability, and this industry continues to go from strength to strength thanks to the quality and diversity of the games available.

Elements of gambling are of course integral to gaming, in part because developers often need to generate randomness in order to make the experience exciting for players, essentially equivalent to the rolling of dice in craps. This applies to everything from randomly selecting the likelihood of an enemy bullet hitting a player character in a first person shooter, to the creation of loot boxes which offer random rewards in almost every new major release, encouraging microtransactions and continued engagement from players.

So as you can see, the most significant forms of modern entertainment have been influenced by gambling to a greater or lesser extent, and this reflects the fascination that audiences have with the highs and lows that casinos and bookmakers bring to the table.