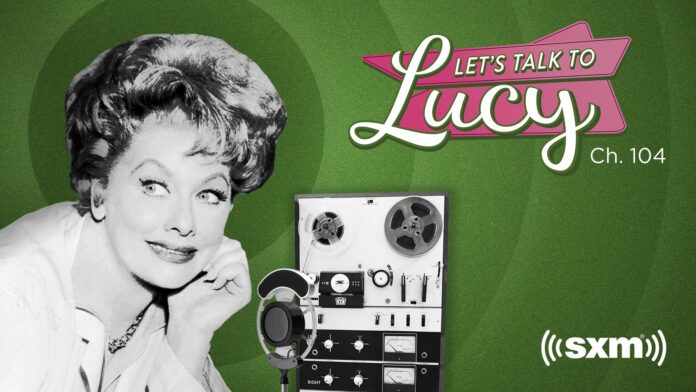 SiriusXM today announced a new channel dedicated to one of the funniest women in the history of comedy: Lucille Ball. “Let’s Talk to Lucy,” named after her 1960s CBS Radio show, will be available on channel 104 starting on August 5. The special programming will also be available on the SXM App, Pandora, and Stitcher.

A star of stage, screen, television and radio, Lucille Ball is an indisputable American legend whose comedic talent and work ethic combined to make her a living legend. Her work is still beloved worldwide, almost ninety years after she arrived in Hollywood.

In-between starring in four television series and more than 70 films, Lucy would frequently jump from set to set, tape recorder in hand, and talk about all aspects of life with some of the biggest names in Hollywood history, including Bing Crosby, Bob Hope, Dean Martin, Carol Burnett, Frank Sinatra, Barbra Streisand, and dozens more. These recordings eventually made it onto air when CBS Radio broadcast them as “Let’s Talk to Lucy” from 1964-1965. However, for the last 50-plus years they’ve never been heard publicly again — until now.

On the new, limited-run SiriusXM channel Let’s Talk to Lucy, listeners will finally get to experience these amazing conversations in their entirety. In addition to hearing from classic Hollywood icons, modern day stars will also join the channel to pay tribute to the five-time Emmy Award winner. Amy Poehler, Rosie O’Donnell, Tiffany Haddish, Ron Howard, Carol Burnett, Debra Messing, Joy Behar, Robert Klein, Barry Manilow, Sean Astin, Kathie Lee Gifford, Seth Rudetsky, Danny Burnstein, Randy Rainbow, among many others, will answer some of the original questions asked by Lucy, herself, in the day.

“Although I have been care-taking these ancient tapes for over thirty years, I had never really listened to them all and had no idea how many remarkable people Mom had talked to on these radio shows,” said Lucie Arnaz, Lucille Ball and Desi Arnaz’s daughter. “It’s a treasure trove of personal information from some of the greatest talents of American Entertainment and my family and I can’t wait to share them with the rest of the planet.”