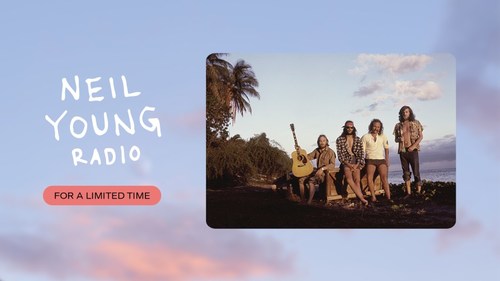 SiriusXM announced today the return of Neil Young Radio, a  satellite and streaming music channel featuring music and exclusive stories from Neil Young.  Following its launch in December as a limited-run channel, Neil Young Radio now returns to its limited engagement home on SiriusXM’s Deep Tracks, channel 27, for 7 days starting today, and for a month streaming on the SXM App.

Neil Young Radio is dedicated to the legendary and ever-evolving rock icon and two-time Rock & Roll Hall of Fame Inductee, and will provide fans access to the entire musical world of Neil Young. The channel will include rarities and exclusives, every new song from his latest album Barn, epic hits and fan favorites from his solo music, collaborations with Buffalo Springfield and Crosby Stills Nash & Young, plus Neil sharing the insights behind writing and recording the music.

As Neil said, “I want to introduce you to some stuff that no one’s ever heard before.”

“When you have an opportunity to present an iconic artist still at the height of his creativity, you don’t hesitate to do it, again,” said Steve Blatter, SiriusXM Senior Vice President and General Manager, Music Programming.  “Outspoken, brave, and a true music icon, Neil Young is in a rare class of artists, and we are honored to collaborate with him to create a special audio experience for his fans.”

SiriusXM is available to subscribers in their car, on their phone and connected devices at home with the SXM App. Streaming access is included for most subscribers. Go to www.siriusxm.com/ways-to-listen to learn more.