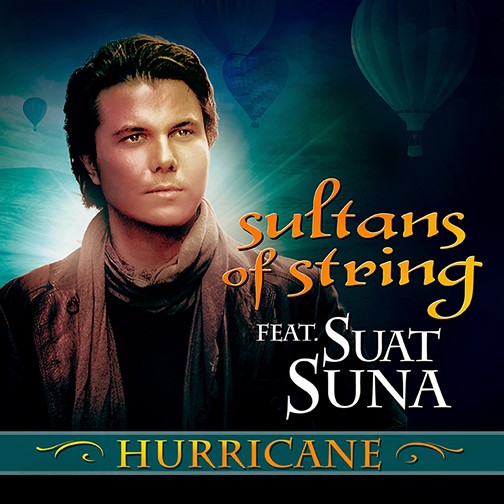 The NY Times and BILLBOARD charting world music supergroup collaborated with Suat Suna for the new song fresh from their eighth and most recent album, Sanctuary: The Refugee Project.

Suat Suna has released 12 studio albums selling millions of copies in his native Turkey. Born in Istanbul to a master violin father, he started learning the violin at the age of four. Suat graduated from Istanbul University Conservatory and started winning many awards, leading to becoming a giant of Turkish pop music, touring endlessly across the country.

The start of the recording process for “Hurricane” began at Jukasa, a world-class recording facility on the Six Nations Indigenous reserve between Toronto and Buffalo. Then violinist, bandleader and co-producer Chris McKhool traveled with JUNO Award winning engineer John ‘Beetle’ Bailey to continue recording in Istanbul, with Suat coming in to Canavar Studio which overlooks the Bosphorus strait in northwestern Turkey that forms part of the continental boundary between Asia and Europe. Suat spent the afternoon cutting the vocals before world famous Turkish percussionist Mehmet Akatay came in to record darbuka on the song.

Next up were recording the strings with Gündem Yayli Grubu, a collection of Roma string players that perform and record for many of the Turkish pop stars. “They have a very distinct sound, all of their own, that cannot be replicated anywhere on the planet.” Those strings give a strong flavour of the ‘old world’ to “Hurricane,” which is an ode to the first Lebanese immigrants to North America.

“My family name would have been pronounced Makhoul back in Lebanon, but when my grandfather was processed upon arrival in 1903 he probably had a Scottish border guard that thought it would be nice to give the spelling a Scottish flair, hence the oddball spelling for a Lebanese name,” explains McKhool. “These first Lebanese to Canada and the U.S. came with no money in their pockets, but with a tremendous drive to succeed. My grandparents saved up and opened a restaurant in Ottawa called the Laurier Tea Room, which did booming business after the war. This song is an ode to the many who came to the New World planning to work hard and save up enough to bring their loved ones over.”

The icing on the cake was traveling to New York to meet with Sammy Figueroa and have him record congas on the track. Besides playing with some of the world’s greatest pop stars, such as David Bowie, Chaka Khan and Mariah Carey, Sammy has also played with a multitude of distinguished jazz artists including Miles Davis, Sonny Rollins, Quincy Jones, George Benson, and many, many more.

“The larger Refuge Project is centered around the positive contributions of refugees and new immigrants to Canada and the U.S.,” McKhool says. “We are bringing in special guests that are newcomers to this land, essential Indigenous voices, as well as global talents that have been ambassadors for peace.”

Sanctuary is the second installment in Sultans of String’s Refuge Project, with he first, simply entitled Refuge, heralded as “a fantastic, moving, dreamlike, epic, timely album” by Ken Micallef (Jazz Times, Stereophile, Downbeat), and winning many awards — including Producer of the Year at the 2021 Canadian Folk Music Awards for bandleader and violinist Chris McKhool.

This ambitious, diverse, inclusive and passionately political album puts the band face-to-face with a VIP roster of global ‘ambassadors’, some of whom are recent immigrants and refugees to Canada, as well as important Indigenous voices. All are masters of world music that communicate with each other through the global language of sound.

Addressing the struggles of life on Mother Earth has always inspired Toronto-based quintet, Sultans of String. On Sanctuary, Sultans of String bring their unique brand of musical synergy and collaboration to bear on 11 songs that speak to the challenges facing the world’s displaced peoples — their stories, their songs, their persistence and their humanity.

Joined by an international cast, some of whom are recent immigrants to North America, the celebrated quartet immerses themselves in the plight of the international refugee on Refuge, and the humanitarian response that should greet everyone in search of a home.

“The larger Refuge Project is centered around the positive contributions of refugees and new immigrants to Canada,” McKhool explains. “We are bringing in special guests that are newcomers to this land, as well as global talents that have been ambassadors for peace. We wish to celebrate the successes of those who make the journey here, and bring their extraordinary talents with them, in this case music. Each one of us has a remarkable story to tell, and we are excited to share the beauty of these collaborations with you.”

It also includes three stunning new versions of songs off Refuge, including an astonishingly gorgeous orchestral version of “The Power of the Land” featuring Indigenous performers Duke Redbird and Twin Flames, flamenco dancer and singer Tamar Ilana singing a version of “Asi Soy” that will rip your heart out, and of course, “Hurricane” with Suat Suna.