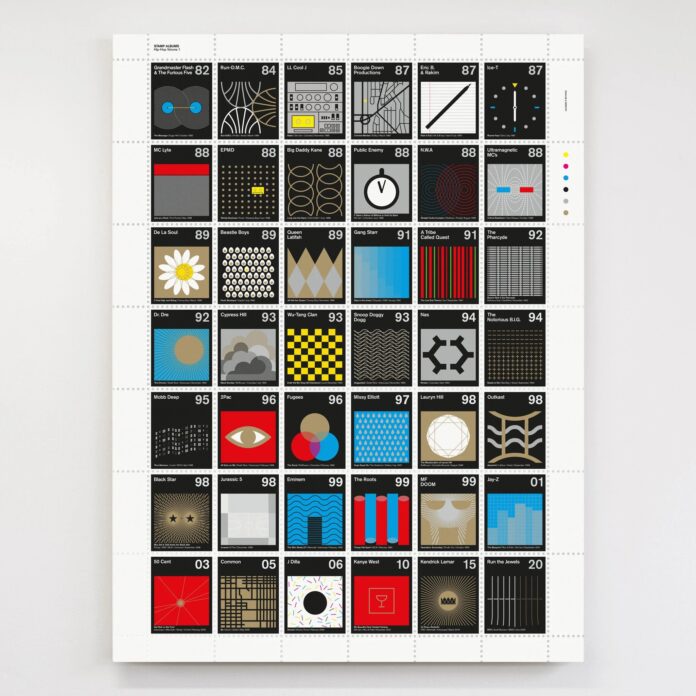 The art company Dorothy continues to blow my mind with their new print celebrating the most influential hip-hop albums of the last 40 years.

They’ve reimagined 42 seminal hip-hop albums as a series of oversized postage stamps beginning with the 1982 breakthrough album The Message by Grandmaster Flash and The Furious Five and featuring other classics including Run-DMC and their 1984 self-titled album, Eric B. & Rakim and Paid in Full, Public Enemy and It Takes a Nation of Millions to Hold Us Back, De La Soul and 3 Feet High & Rising, Beastie Boys and Paul’s Boutique, A Tribe Called Quest and The Low End Theory, Wu-Tang Clan and Enter The Wu-Tang (36 Chambers), Nas and Illmatic, Fugees and The Score, Missy Elliott and Supa Dupa Fly, Lauryn Hill and The Miseducation Of Lauryn Hill, Eminem and The Slim Shady LP, Jay-Z and The Blueprint, Kanye West and My Beautiful Dark Twisted Fantasy and Kendrick Lamar and To Pimp a Butterfly.

Each stamp features a graphic inspired by the album (or tracks on the album), the date of release, the label it was released on and its running time.

It’s available here, and get it now!