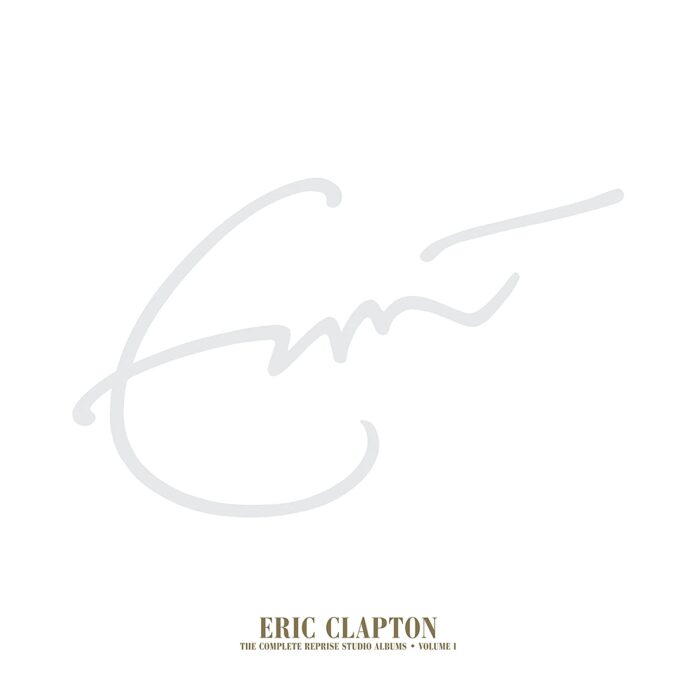 Eric Clapton, one of music’s most influential and successful recording artists, joined Reprise Records in 1983, launching a prolific period that spans 30 years and encompasses some of his most celebrated work. An upcoming limited edition, 12-LP boxed set revisits Clapton’s first six albums for Reprise along with an LP exclusive to this collection that features rarities from the era, including a previously unreleased remix of “Pilgrim” by co-writer and long-time Clapton producer Simon Climie.

THE COMPLETE REPRISE STUDIO ALBUMS – VOLUME I will be available on September 30 with pre-orders available now. It contains newly remastered versions of six studio albums pressed on 180-gram vinyl: Money and Cigarettes (1983) as a single LP, and Behind the Sun (1985), August (1986), Journeyman (1989), From the Cradle (1994), and Pilgrim (1998) as double-LPs. Behind The Sun and August were originally released as single LPs; both are now 3-sided double albums to avoid long LP sides and to maximize the audio quality.

The final LP in the collection, Rarities (1983-1998) brings together eight rare recordings from this era, including live versions of “White Room” and “Crossroads” that were both featured on the B-side on the 1987 single “Behind The Mask.” Another B-side, “Theme From A Movie That Never Happened” (Orchestral), appeared in 1998 on the GrammyÒ winning single, “My Father’s Eyes.” A cover of Albert King’s “Born Under A Bad Sign” (an outtake from GrammyÒ winning album From The Cradle) is available today on YouTube. Click HERE to listen now.

All the music included in this collection was mastered by Bob Ludwig at Gateway Mastering and the lacquers for the LPs were cut by Chris Bellman at Bernie Grundman Mastering.

VOLUME I spans 15 years and touches on some of Clapton’s biggest studio albums. It begins with Money and Cigarettes, the guitarist’s eighth solo studio album, which he co-produced with Atlantic Records’ legend Tom Dowd. Released in 1983, it reached the Top 20 in the U.S. and the U.K. and introduced the hit single “I’ve Got A Rock ’n’ Roll Heart.”

Clapton worked with Phil Collins to produce his next album, Behind the Sun, which peaked at #8 in the U.K. The album would earn platinum-certification in the U.S. thanks to hits like “Forever Man” and “She’s Waiting.” Collins returned to co-produce the next album, August, as well. Certified gold in the U.S., it featured a trio of Top 10 singles – “Miss You,” “Tearing Us Apart,” (a duet with Tina Turner) and the #1 smash, “It’s In The Way That You Use It.” Clapton co-wrote the latter with Robbie Robertson and co-produced the track with Dowd. The song was also featured in The Color of Money, the 1986 blockbuster film starring Paul Newman and Tom Cruise.

Journeyman, Clapton’s 1989 follow-up, reached #2 in the U.K. where it was certified platinum. An international sensation, the record was certified platinum in Canada and gold in Argentina, Australia, France, Japan, Netherlands, New Zealand, Spain, Sweden, and Switzerland. The album was certified double platinum in the U.S., scoring #1 hits on the Mainstream Rock charts with “Pretending” and the Grammy winning single “Bad Love.” The album had two more Top 10 hits in America with “Before You Accuse Me” (#9) and “No Alibis” (#4).

Following the runaway success of his 1992 live album Unplugged, Clapton returned in 1994 with From The Cradle. A blues covers album, it featured his versions of song recorded by some of the bluesmen who influenced him, including Robert Johnson, Howlin’ Wolf, Muddy Waters Freddie King and more. The album was certified triple-platinum in the U.S., where it topped the Billboard 00. It also reached #1 in the U.K., making it his only #1 album in the U.K. to date. In addition, From The Cradle won the Grammy Award for Best Traditional Blues Album.

The final release on VOLUME I is Pilgrim, Clapton’s 1998 Grammy Award winning 13th solo studio album. It reached the Top 10 in more than 20 countries, including the .S. (#4) and the U.K. (#3). A passion project for Clapton, the album was certified platinum in America thanks to hi singles like, “My Father’s Eyes,” “Circus,” “Born In Time” (penned by Bob Dylan) and the title track.

In the fall, Clapton will play a series of concerts n the U.S. with special guest Jimmie Vaughn. The tour begins on September 8 in Columbus, OH and ends on September 19 in New York City. Tickets are on sale now.

Early 2023 will see the release of The Complete Reprise Studio Albums – Volume 2, a companion vinyl boxed set that features Clapton’s Reprise studio albums spanning 201-2010, along with an exclusive LP of rarities from that era. More details on this release will be announced soon.