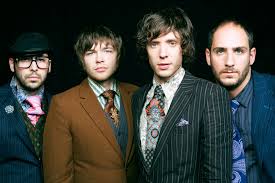 The band OK Go is known for its insanely creative, viral music videos, and now, they are pushing the bounds of creativity again by releasing their latest album, “Hungry Ghosts,” on DNA.

OK Go is working with Sri Kosuri, a UCLA biochemist, to translate their music so it can be stored in DNA and potentially sold to avid fans. Kosuri has previously translated a book into DNA and his work is focused on storing data biologically. “[DNA is] information,” Kosuri told the New Yorker. “Our bodies use it to code for life, but it could be anything.”

When music is encoded digitally, as with an MP3 file, it is translated into binary code (ones and zeros). To turn it into DNA, Kosuri will change the binary code into genetic code—using the A, G, T, and C bases that are DNA’s building blocks. Once the strain of DNA is created in an electrophoresis machine, a fan could buy a vial containing a few nanograms of DNA dissolved in water, comprising over a hundred thousand copies of the album.

“So, if we sell just one or two water droplets, we’ll have the highest-selling album of all time,” said lead singer Damian Kulash.