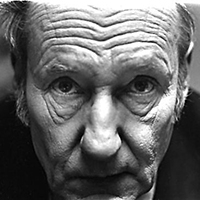 This American Life host Ira Glass was never into William Burroughs. Didn’t get why people love his writing so much. Then he heard this radio story that changed all that, partly because it wasn’t very reverential about Burroughs. For Burroughs 101st birthday, we hear that story.

Iggy Pop, the documentary’s narrator, begins by listing some of the artists and artistic movements influenced by Burroughs: Bob Dylan, The Beatles, Steely Dan, Kurt Cobain, Lou Reed; punk, heavy metal. We hear from director John Waters on the impact on him of Burroughs’ open homosexuality and frankness about sex. Others talk about Burroughs’ heroin addiction and obsession with guns and weapons. Burroughs shot his wife to death in what he said was a terrible accident.

Iggy Pop picks up the story of Burroughs by explaining “Cut Up” — Burroughs habit of randomly jumbling, repeating and re-assembling words and phrases in his writing. David Bowie and others picked it up. We hear about Burroughs’ privileged childhood in St. Louis and his lifelong critique of exactly the world of power and money he grew up in. There’s archival footage of Burroughs and others reading his sci-fi stories, and finally Burroughs appearing on Saturday Night Live.