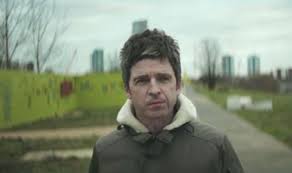 WE’RE LIVING IN “SAVAGE” times, reckons Noel Gallagher, but the ex-Oasis star says you’d be hard pushed to hear that reflected by the current crop of British singer-songwriters.

Speaking to MOJO, Gallagher has branded new music “bland”, arguing that, unlike previous generations, new artists make no effort to reflect the mood of the era in their songs.

“I hear mindless pop on the radio and then the news is: ‘The World Is Going To End!’ What’s going on? What has become apparent to me is that we live in ridiculous fucking times now. The music that’s being made now is so fucking bland. It’s nice and kind of meaningless and then you turn on the television and the news is so savage! The music doesn’t reflect the times at all. I hear Radio 1 in the morning when the kids are up and going to school and it’s just bland, meaningless, mindless pop music and then the news is: ‘The World Is Going To End!’ What’s going on? The music of George Ezra: Wow! I was talking to a mate recently who’s been in various bands and I was asking what he was doing and he was saying, ‘I’m trying to do my own stuff now.’ I said, ‘You should be in a band, you look great,’ and he said, ‘Nobody wants to be in bands any more, everybody wants to be a singer-songwriter.’ That’s his generation. Everyone wants to be Jake Bugg or George Ezra. The band thing is dying out. I blame it on the lack of rehearsal rooms and the lack of little tiny studios because it’s easier for a guy to sit at home with a tape recorder and send it to a record company than it is for a band. Back in my day, we used to go down the rehearsal room when it was 20 quid a night, or whatever it was, and you bash it out. Everybody’s got a home recording studio on their iPhone now. All the cheap studios and venues are going to go soon. You’re going to either be stuck at the bottom in [London pub venue] the Boston Arms or you’re going to be catapulted to the top at The O2 and there will be nothing in between.”