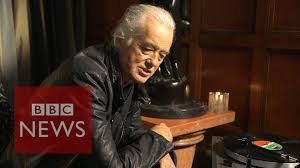 Forty years ago this week, Led Zeppelin released the band’s monumental sixth album, the double LP Physical Graffiti. This is a great time as any for Jimmy to look back at his biggest influence:

There was this sort of explosion of music that happened for the youth in the ’50s. And quite clearly it was rock and roll, but also what we had over in England was this guy Lonnie Donegan. And he spawned the whole skiffle movement and caught people’s imagination. And he was superb. He was absolutely superb, but there he was playing like an acoustic guitar and doing these performances. Every Saturday there would be a show on the television where usually he was on, every other week, and it was just something to behold at the time. Just his whole passion and the way that he delivered his material. Now the thing is that he’d been in a jazz band prior to that, Chris Barber’s Jazz Band, and Chris Barber was very much somebody who … he played trombone, Chris Barber, but he was very much into the blues. In fact, he was behind getting Muddy Waters to visit in England in the ’50s. Absolutely astonishing stuff, isn’t it? And so when Lonnie Donegan was playing the banjo in his sort of traditional jazz band … I guess when Lonnie Donegan wanted to sort of do these songs, [Barber] was fine with it. Bringing through the sort of blues, American country blues and all of that. So Lonnie Donegan is playing “Rock Island Line.” Which at the time, obviously, we thought it was a Lonnie Donegan song, but it sort of goes back more to the sort of roots of Leadbelly. And he really understood all that stuff, Lonnie Donegan. But this is the way he sort of, should we, say jazzed it up or skiffled it up. But it was to the point where so many of the guitarists from the ’60s will all say Lonnie Donegan was the influence.