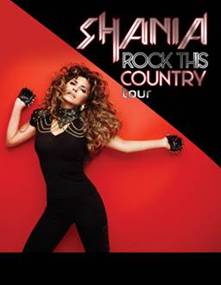 One of the world’s best-selling female artist in history, Shania Twain, has announced her first North American tour in more than 11 years entitled ROCK THIS COUNTRY.   The 48 date run comes hot on the heels of her hit two-year residency in Las Vegas at The Colosseum at Caesars Palace.

Shania’s tour kicks off in North America on June 5 in Seattle, WA where she will perform her extensive catalog of iconic hits in a brand new production for fans coast to coast in major US cities such as New York, Washington DC, Los Angeles, and Chicago, among others. Additionally, the tour will hit Canadian cities including Toronto, Vancouver, Edmonton, and Montreal, presented by AEG Live.  American Express® Card Members can purchase tickets through Front Of The Line for the Canadian shows only before the general public beginning Tuesday, March 10th at 10am through Thursday, March 12 at 10pm local time, with the public on-sale for most North American shows beginning Friday, March 13 at 10:00 am local on axs.com. Exceptions noted below.  ShaniaTwain.com presale begins Tuesday, March 10 at 10am local time through Thursday, March 12 at 10pm local time.

A limited number of exclusive VIP Packages also will be available. Theses offers can include premium reserved tickets, access to Shania Twain’s preshow VIP sound check, exclusive merchandise and much more. A $1.00 donation from each ticket purchased will go to the Shania Kids Can Foundation. Opening acts include Canadian musician and actor Wes Mack from June 5 – June 28, and Grammy Award nominated singer/songwriter Gavin DeGraw from June 30 – August 23.

“This is a celebration tour. It’s party time!  The ROCK THIS COUNTRY tour will have a different spirit than my past tours,” said Twain. “It’s a Shania they’ve never seen before.  A lot of years have gone by and I’ve got a lot more to share.”

Beloved by millions worldwide, Shania has multi-platinum album sales in 32 countries with over 75 million albums sold, and 17 top 10 singles. Three of Shania’s albums (The Woman In Me, Come On Over, Up! ) reached Diamond certification, making her the only artist to have three consecutive albums sell more than 10 million copies in the US.

Rising to fame with her debut album Shania Twain (1993), Shania became a worldwide phenomenon with the release of Come On Over (1997), which became the best-selling country album of all time, and the best-selling album released by a female artist. Most recently, Shania performed 105 shows during her two-year Las Vegas residency, Shania: Still The One, beginning on December 1, 2012 at The Colosseum at Ceasars Palace and wrapping in December of 2014. The show garnered rave reviews throughout its tenure.