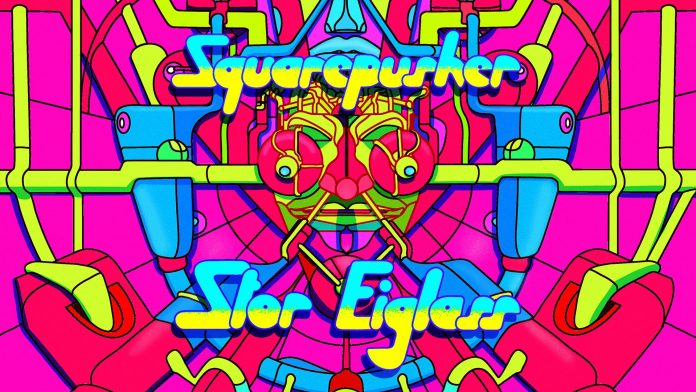 Squarepusher‘s latest track “Stor Eiglass” from his Damogen Furies album (Warp) has a virtual reality music video, which you can experience with a Samsung Gear VR headset, Google Cardboard, on phones and tablets, and in YouTube’s 360º platform (embedded above). The fuller the immersion the better.

A collaboration between artists Marshmallow Laser Feast, animators Blue Zoo, and illustrator Rob Pybus, the video itself is a candy-colored jaunt where you get to glance around a 3D world as your travel through it. In a meta-narrativeabout VR, it starts off in a multi-colored utopia where people do star jumps in public, before we journey into a gloomy future where everyone’s hooked on headsets, bodies spasming to the stimulus of a virtual world.

Along the way, if you look directly downwards at your own figure, you’ll notice the protagonist turning from a hardbody into a breasted blob as he trades exercise for the blue pill. The psychedelic journey takes you through all kinds of bizarre landscapes, from shamanic dancing in the desert with laser-eyed stone sculptures to a squalid bedsit.

“The inspiration for the project came from an in-depth chat between ourselves, Rob Pybus and Tom Jenkinson (Squarepusher),” explains Marshmallow Laser Feast’s Robin McNicholas. “His new album both celebrates and exposes the ludicrousness of the modern electronic music scene and we saw parallels with the emerging VR scene. So we wanted to create a journey that had a story embedded in it which reflected that.”

Via The Creators Project