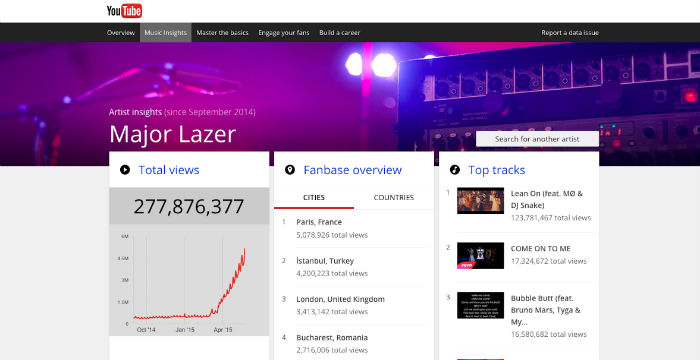 YouTube has taken a lot of flak from musicians and the music industry in recent months, but one thing it’s done that has been generally welcomed is YouTube for Artists.

Launched in March, it was a music-focused hub to help artists get more out of YouTube, with tips and case studies. At the time, YouTube said it would also be adding more powerful analytics to the site. Today, they’re going live.

The new tool is called Music Insights, and its key features include city-level data on where people are watching music videos, as well as a combination of stats from artists’ own uploads and those of fans that include their music – well, the videos claimed using Content ID, anyway.

According to YouTube, the new tool uses a new classification system it rolled out in September 2014, rounding up views by artist rather than by channel, as well as drilling down to city-level for viewers.

Its launch coincides with an expansion for YouTube for Artists: from the purely English-language version available in March, it has now expanded to 22 languages.