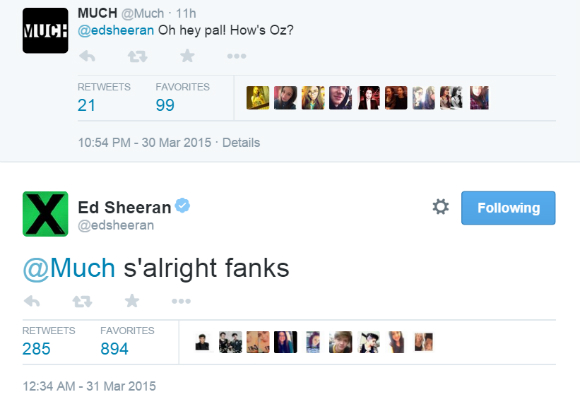 The 2015 MUCH MUSIC VIDEO AWARDS stunned in a multi-channel super simulcast tonight, with this year’s biggest winner, Toronto’s own alternative R&B sensation and first-time MMVA performer The Weeknd, scooping up four awards for Video of the Year, Best Director, Best Pop Video, and Most Buzzworthy Canadian. The broadcast’s charming co-host Ed Sheeran scored two MMVAs for Best International Artist and Most Buzzworthy International Artist, with local duo, and Drake collaborator, Majid Jordan picking up Best MuchFACT Video for “Forever”. Fans went wild when Drake made a surprise appearance to help present P.Reign with the award for Best Hip Hop Video for “DnF” on which the Toronto rapper is featured.

The corner of Queen and John streets in Toronto lit up tonight with the MMVAs, one of the world’s biggest and most exciting street-level award shows. Global mega-star Ed Sheeran was in full command of the stage in his fourth annual MMVA appearance, his first as co-host, as he led a remarkable evening filled with some of the world’s biggest names in music and entertainment. Talent who graced the 2015 MMVA stage included performers such as Carly Rae Jepsen, Nick Jonas, Fall Out Boy, and Walk Off The Earth, and presenters such as International supermodel Gigi Hadid, E!’s SEX WITH BRODY star Brody Jenner, and GRAMMY-nominated rocker Adam Lambert.

In the Twitterverse, 10 MMVA related topics trended in Canada, including #MMVA, which also trended internationally.  2015 MMVA performers and presenters also joined in, with Nick Jonas and Carly Rae Jepsen both tweeting their thanks to Much, and Hailee Steinfeld tweeting “#MMVAs THAT WAS SO REAL.”

The two-hour music extravaganza encores tomorrow, Monday, June 22, at 7 p.m. ET, and again throughout the week on Much or on demand now at much.com.

Setting the tone for the 2015 MUCH MUSIC VIDEO AWARDS was Fall Out Boy with an energetic rendition of their latest single “Uma Thurman”, immediately followed by Canadian sweetheart Carly Rae Jepsen performing her infectious hit single “I Really Like You”. Co-host Ed Sheeran delivered with a performance of “Photograph”, complete with a string quartet, and later returned with an intimate performance of “Thinking Out Loud” surrounded by the ecstatic MMVA crowd. Newcomer Tori Kelly made her MMVA debut with a powerhouse performance of “Nobody Love”, followed by Canadian Scott Helman whose feel good performance of his single “Bungalow” had fans dancing. Four-time 2015 MMVA winner The Weeknd set the stage aglow with a medley of “Earned It” and “The Hills” – the first-ever broadcast performance of the single. Canadian artists kept the fans screaming, with Walk Off The Earth performing their new single “Rule The World”, winner of FAN FAVE Video, Shawn Mendes, singing “Stitches”, and Mia Martina delivering a red-hot version of her single “Beast” featuring Waka Flocka. Nick Jonas captivated fans with a sexy performance of his hit single “Chains”, and Jason Derulo, joined by dozens of dancers, closed the show with “Want To Want Me”.

“From the boundless energy of our devoted fans to the calibre of the talent – tonight’s show was one not to be missed,” said Tracey Pearce, Senior Vice-President, Specialty and Pay, Bell Media. “The spectacle on our stage, which featured some of the top names in music, and the conversation it created internationally via social media platforms such as Twitter, illustrates how the MMVAs continue to be a one-of-a-kind experience for our audience.”

And the winners are…

Video of The Year
The Weeknd – “Often”

Most Buzzworthy Canadian
The Weeknd