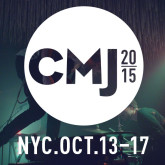 This year’s edition of CMJ Music Marathon will be held in New York City from October 13-17. In its 34th year of existence, CMJ is one of the world’s most important platforms for music discovery. Held over the course of a week, CMJ presents more than 1,400 live performances across 80 of NYC’s finest nightclubs and theatres. We were there last year (marking out 8th year of attendance) and the results were impressive, to say the least. Over 2 Canadian Blast evening showcases + 2 pre-showcase networking events, 9 Canadian music companies and 10 of their Canadian artists joined our mission. They reported making 115 new contacts, 77 meetings, with 15 business deals started at CMJ 2014 (6 were finalized). Check out the full event report here.

CIMA will be returning to CMJ in 2015, and we’re planning to hold a targeted Canadian Blast showcase and networking reception (more specific details TBA). If you’re interested in showcasing, you will have to apply directly to CMJ as our showcase features approved, official CMJ Canadian acts only. Please note: we do require a business representative in attendance at all our Canadian Blast showcases.

If you’ve applied please drop CIMA’s Music Export Manager, Trisha Carter (trisha@cimamusic.ca) a line to let her know which artist you’ve applied for and who would be representing that artist should you get into CMJ.