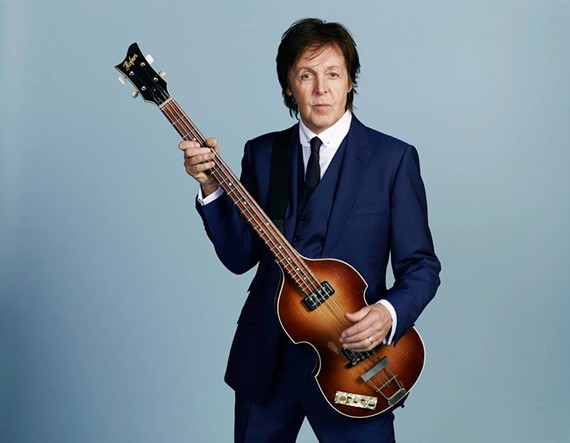 Paul McCartney: I always looked at life from a point of view of the public. I think I’ve got a good sense of that. The Beatles split up and we were sort of all equal. George did his record, John did his, I did mine, Ringo did his. It was as we were during the Beatles’ times. We were equal. When John got shot, aside from the pure horror of it, the lingering thing was, OK, well now John’s a martyr. A JFK. So what happened was, I started to get frustrated because people started to say, “Well, he was The Beatles.” And me, George and Ringo would go, “Er, hang on. It’s only a year ago we were all equal-ish.” Yeah, John was the witty one, sure. John did a lot of great work, yeah. And post-Beatles he did more great work, but he also did a lot of not-great work. Now the fact that he’s now martyred has elevated him to a James Dean, and beyond. So whilst I didn’t mind that – I agreed with it – I understood that now there was going to be revisionism. It was going to be: John was the one. That was basically the thing. And when I would talk to mates they’d say, “Don’t worry. People know [the truth]. It’s OK, they know what you did.” But then strange things would happen. Like Yoko would appear in the press, and I’d read it, and it said [comedy Yoko accent], “Paul did nothing! All he did was book the studio…” Like, “Fuck you, darling! Hang on! All I did was book the fucking studio?” Well, OK, now people know that’s not true. But that was just part of it. There was a lot of revisionism: John did this, John did that. I mean, if you just pull out all his great stuff and then stack it up against my not-so-great stuff, it’s an easy case to make.

What happened, when we were kids we were looking for what to call our songs. We had a meeting with Brian Epstein, John and me. I arrived late. John and Brian had been talking. “We were thinking we ought to call the songs, Lennon and McCartney.” I said, “That’s OK, but what about McCartney and Lennon? If I write it, what about that? It sounds good, too.” They said, “OK, what we’ll do is we’ll alternate it: Lennon and McCartney, McCartney and Lennon.” Well, that didn’t happen. And I didn’t mind. It’s a good logo, like Rogers and Hammerstein. Hammerstein and Rogers doesn’t work. So I thought, “OK”. But what happened was the Anthology came out [in 1996, with Epstein and Lennon now long dead]. And I said, “OK, what they’re now saying is, ‘Song by John Lennon and Paul McCartney.’” I said, if you’re doing that, it’s not Lennon and McCartney, it’s not the logo any more. So, in particular cases like ‘Yesterday’, which John actually had nothing to do with, none of the other Beatles had anything to do with – I wrote it on my own, sang it on my own, they’re not on the record, nobody is even involved with it, and they didn’t mind that and I didn’t mind, nobody minded, but that’s very much mine – so I said, “Could we have ‘By Paul McCartney and John Lennon’, wouldn’t that be a good idea? And then on ‘Strawberry Fields’ we’ll have, ‘By John Lennon and Paul McCartney’. ‘Nowhere Man’, ‘John Lennon and Paul McCartney’. ‘Penny Lane’, ‘Paul McCartney and John Lennon’. Seeing as we’re breaking it up, can we do that?” And at first Yoko said yeah. And then she rang back a few days later and she had this guy Sam Havadtoy who she was living with – she was co-Havadtoying – and she said she’d decided it wasn’t a good idea and no, no, no, no. And it became a bit of an issue for me. Particularly on that particular song, because the original artwork had ‘Yesterday’ by John Lennon and Paul McCartney and a photo of John above it. And I went, “Argh! Come on, lads!” Anyway they wouldn’t do it.

Well, what happened was there was a backlash from people who didn’t see where I was coming from. “Dancing on a dead man’s grave” was one of the phrases that came up. “What a bighead!” “Why does he want his name in front of John’s?” But it was nothing to do with bighead. It’s just to do with identifying who wrote what. John did a really good Playboy interview where he did that: “This is mine, this is Paul’s.” So I thought, “Just use that! John said it!” I thought that was perfectly reasonable and I still do, by the way. But I don’t think it’s achievable for some reason. The arguments I used was these days I’ll get a cinema ticket and I will go to a film called “Miss Congeni-”. The “-ality” is missed off. What starts to happen is, “A song by John Lennon and-”. You know how on your iPad there’s never enough room? So it’s kind of important who comes first. Late at night I was in a hotel room looking online and I happened to see this music book, which has got all the songs in it, and it was ‘Hey Jude’ by John Lennon and…” and the space ran out. There’s a poetry book, Blackbird by John Lennon and Paul McCartney.” No! He didn’t write those lyrics! So, at the risk of seeming like… I tell you what, if John was here he would definitely say that’s OK. Because he didn’t give a damn. It wasn’t anything that worried him. But I’ve given up on it. Suffice to say. In case it seems like I’m trying to do something to John.