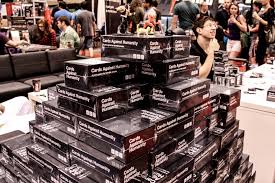 Cards Against Humanity announced today that it has partnered with the prestigious Chicago Design Museum to release the “Design Pack,” an expansion pack of 30 fully-illustrated cards created by world-class designers.

“In our increasingly politically correct culture where the desire to protect people’s sense of identity is paid for by reducing people’s freedom of expression, I commend any chance an artist gets to fully express themselves,” said Kelly Carlin, George Carlin’s daughter, before adding: “This shit is great!”

All profits from the Design Pack will benefit the Chicago Design Museum, a grassroots, not-for-profit gallery that exhibits contemporary design. Similar non-profit packs by Cards Against Humanity have raised nearly three million dollars for non-profit partners DonorsChoose.org, the Wikimedia Foundation, and the Sunlight Foundation.

“The Chicago Design Museum has been my dream for the last five years,” said museum co-founder Tanner Woodford. “With this pack, we will become a sustainable part of Chicago’s design culture for years to come.”

“We love the Chicago Design Museum because it has a grassroots origin similar to our own,” said Cards Against Humanity co-creator and pack contributor Max Temkin. “They’ve gone from a Kickstarter project to curating the most exciting design shows in the world.”

“Our research shows that today’s youths don’t like to read anything with words, so here’s just a bunch of pictures,” said Cards Against Humanity co-creator Ben Hantoot. “Frankly, I’m glad they’ll never read this press release.”

“We’ve been out of ideas for two years,” said Cards Against Humanity co-creator Eli Halpern. “Maybe people will like this? Who knows. Fuck it.”

“The Design Pack is being published at a critical moment in the museum’s trajectory, and will allow us to expand our efforts to strengthen design culture and build community in Chicago and beyond,” said Woodford.

The Design Pack is available through at designpack.org, or at the Chicago Design Museum, Block Thirty Seven, 108 N. State Street, 3rd Floor.

Cards Against Humanity is a party game for horrible people. It is the top-selling, best-reviewed, and most-wished-for toy or game on Amazon.com.

The Chicago Design Museum strengthens design culture and builds community by facilitating the exchange of knowledge through dynamic experiences.