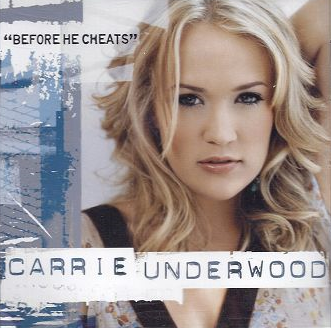 Carrie Underwood’s “Before He Cheats” was the third wide-release single from Carrie Underwood’s debut album, Some Hearts from 2005. It was the fifth release from the album overall. The song became an enormous crossover success, topping the Billboard Hot Country Songs chart for five consecutive weeks, reaching the top five on the Billboard Adult Top 40 chart and becoming a top ten hit on the Billboard Mainstream Top 40 and Adult Contemporary charts. On the Billboard Hot 100 chart, “Before He Cheats” reached number eight and achieved a longevity of 64 consecutive weeks on the chart, making it the sixth longest-charting single in the history of the Hot 100.