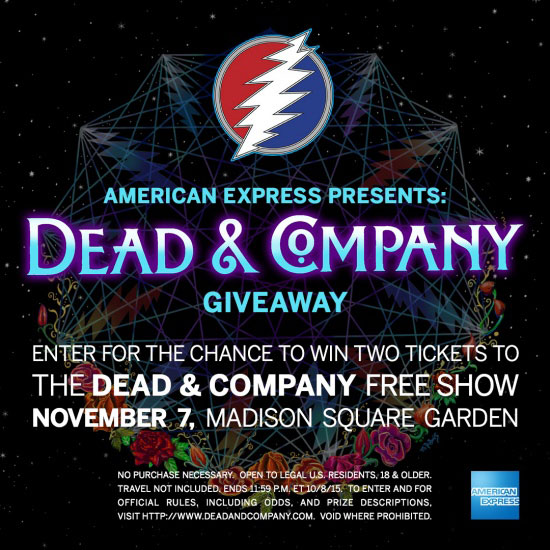 American Express announced today that Dead & Company has been chosen as the next artists in its popular live stream music series “American Express Unstaged,” in partnership with Vevo and YouTube. This new show has been added to the band’s Fall 2015 tour schedule on Saturday, November 7 at Madison Square Garden. The band and American Express will distribute 10,000 free tickets for this concert via a sweepstakes and fans will have the chance to support the Robin Hood Foundation, New York’s largest poverty-fighting organization.”

The Amex Unstaged global concert livestream will be directed by Brett Ratner and will be streamed at amexunstaged.com and via the Unstaged app on the evening of November 7.

To be eligible to win one of 5,000 pairs of free tickets to this show, fans who are U.S. residents, 18 and over can enter the official American Express Presents: Dead & Company Giveaway sweepstakes at www.DeadAndCompany.com beginning Monday, October 5 at 12 a.m. ET. The sweepstakes entry period will be closed on Thursday, October 8 at 11:59 p.m. ET. Ticket distribution details will be communicated directly to sweepstakes winners on or after Thursday, October 22. Tickets for this concert will not be made available for sale, and are only available to the public through the sweepstakes. There is no purchase necessary to enter, and official rules for the sweepstakes can be found via the entry page.

Grateful Dead members Mickey Hart, Bill Kreutzmann and Bob Weir joined forces with singer/guitarist John Mayer to form the band Dead & Company. The band will take the stage at a series of shows this Fall including three nights at the legendary Madison Square Garden and will perform two sets of music drawing largely from the Dead’s historic catalog of songs.

“Well, this is great – this is the system working at its best. Our fans get music for free, we get to play our music for a bunch of folks who might otherwise not get to catch it, AMEX gets to support music and the arts, and everyone gets to come together at Madison Square Garden and online to benefit The Robin Hood Foundation and New York City’s less fortunate,” said Weir.

Hart remarked, “New Yorkers have given us their hearts over the years. I’m proud to support The Robin Hood Foundation who are in the trenches, on the streets making a real difference for those who are homeless but not hopeless.”

Kreutzmann commented, “As you know, it’s been a phenomenal 50th anniversary year and now we’re resurrecting the spirit of the Dead at MSG. The Dead has always been inclusive, not exclusive. After all, we are everywhere. So we decided to add a third night at MSG, but this time…for free. Your patience and dedication will be rewarded.”

“This is one of those great moments where everything clicks. The spirit of the music, the great generosity and hard work of The Robin Hood Foundation, the beautiful energy of a concert at MSG as only Amex Unstaged could put together, and a night for fans to enjoy music that’s truly free,” said Mayer.

“This unique Dead & Company show will be a tremendous musical experience for fans at the Garden and those watching the livestream. We’re thrilled to create a memorable experience for the devoted followers of this iconic group of musicians in New York and beyond,” said John Hayes, Chief Marketing Officer, American Express. “As importantly, it’s a great opportunity for American Express to give our Card Members and all fans of the Dead the chance to support Robin Hood.”

Given the live show and livestream are free, fans will have opportunities to “pay it forward” and help Robin Hood in its mission of finding, funding and creating programs and schools that generate meaningful results for families in New York’s poorest neighborhoods. For more information about the foundation, visit www.robinhood.org.

“There are 1.8 million New Yorkers living in poverty,” said David Saltzman, Executive Director of Robin Hood. “We are especially grateful to Dead & Company, American Express and the entire caring community of Dead fans for the opportunity to help transform lives with their donations.”