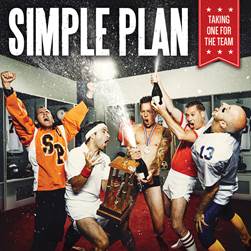 Atlantic recording group Simple Plan have unveiled details of their long awaited, new release. “TAKING ONE FOR THE TEAM” – the multi-platinum band’s fifth studio full length and first new album in five years – will be available on February 19. Pre-order information will be announced shortly. Tickets for an extensive European tour go on sale this Friday, December 4.

From Simple Plan: “We are really excited to announce the first tour in support of our new album “Taking One For The Team, coming out on February 19th! These European shows will be the first of many international tours that we’ll be announcing. We can’t wait for our fans to hear the new album and to be back on the road.”

Simple Plan has earned widespread acclaim and a global fan following for their genre-defying blend of classic punk energy and modern pop sonics. Since coming together in 1999, the Montreal-based combo has achieved worldwide sales in excess of 7 million, with releases including 2002’s RIAA 2x-platinum debut, “NO PADS, NO HELMETS…JUST BALLS,” 2004’s platinum-certified follow-up, “STILL NOT GETTING ANY,” and 2005’s “MTV HARD ROCK LIVE.” 2008’s “SIMPLE PLAN” proved an international blockbuster upon its release, reaching the #1 spot on the iTunes Store’s “Top Pop Albums” chart while also scoring top 3 successes in Mexico, Brazil, Japan, and the band’s native Canada. Furthermore, the album premiered in the top 10 in such far-away lands as Hong Kong, Sweden, Austria, Switzerland, Australia, and Germany, with top 20 debuts in Spain, Finland, and France.