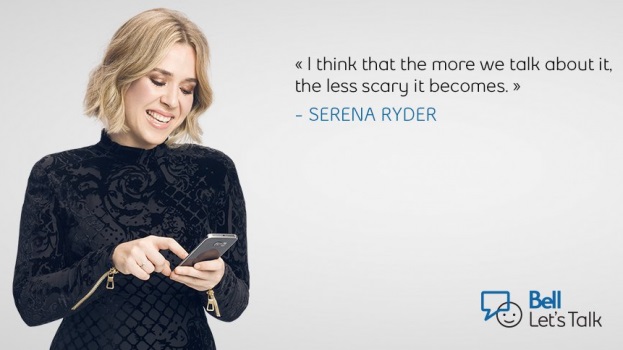 “We turn up the mental health volume on Bell Let’s Talk Day, letting all those who struggle know they have our support and can reach out for help without fear. At the same time, Bell increases its funding of Canadian mental health programs with each message of support you send,” said Clara Hughes, Canada’s 6-time Olympic medalist and national Bell Let’s Talk spokesperson since its launch in 2010. “I am so excited to be part of the incredible journey to making Canada a nation free of the stigma around mental illness. As we begin the next 5 years of our mental health initiative, I invite you to join me on January 27 to take the conversation further than ever before!”

Last September, Bell announced the extension of Bell Let’s Talk for a further 5 years and an increase in its total funding commitment to at least $100 million.

“Over the past 5 years, Bell Let’s Talk has made significant progress in increasing awareness and improving attitudes about mental health while also supporting significant new Canadian initiatives in care and access, research and workplace mental health,” saidGeorge Cope, President and CEO of BCE Inc. and Bell Canada. “Together, we’ve made a real difference. But mental illness continues to have a tremendous impact on individuals and families, our communities, our workplaces and our national economy. I would like to thank everyone who has been part of Canada’s mental health movement over these past 5 years and welcome everyone to this year’s campaign as we work to keep the positive momentum going.”

A 2015 Nielsen survey undertaken on behalf of Bell Let’s Talk found that 81% of Canadians were more aware of mental health issues than in 2010 (87% of youth aged 18 to 24), 70% think attitudes about mental health have changed for the better (79% of young people), and 57% believe the stigma around mental illness has been reduced (65% of young people).

Joining the mental health conversation on Bell Let’s Talk Day not only supports those who struggle with a mental illness, you also drive Bell’s funding just by participating at no extra cost to you. For every text message, wireless and long distance call made by Bell Canadaand Bell Aliant customers, every tweet using #BellLetsTalk, and every Facebook share of the Bell Let’s Talk Day image at Facebook.com/BellLetsTalk, Bell will donate 5 cents more to Canadian mental health programs.

Bell’s donations are made at no extra charge to Bell Let’s Talk Day participants, though normal long distance or text charges, if any, apply.

This year’s Bell Let’s Talk’s campaign builds on the 5 simple ways to fight the stigma developed by Dr. Heather Stuart, the first Bell Mental Health and Anti-Stigma Research Chair at Queen’s University, and introduced as part of the 2015 Bell Let’s campaign:

“The 5 simple ways enable Canadians to engage in conversations about mental health and help support those who live with mental illness,” said Mary Deacon, Chair of Bell Let’s Talk. “As conversations grow and awareness and understanding increases, stigma is reduced. It’s a way we can all help those who struggle with mental illness – most of whom won’t otherwise seek the help they need because of embarrassment or fear that they will be judged for their illness.”

To learn more about the campaign, and to download the Bell Let’s Talk toolkit to help get your conversation started, please visit Bell.ca/LetsTalk.