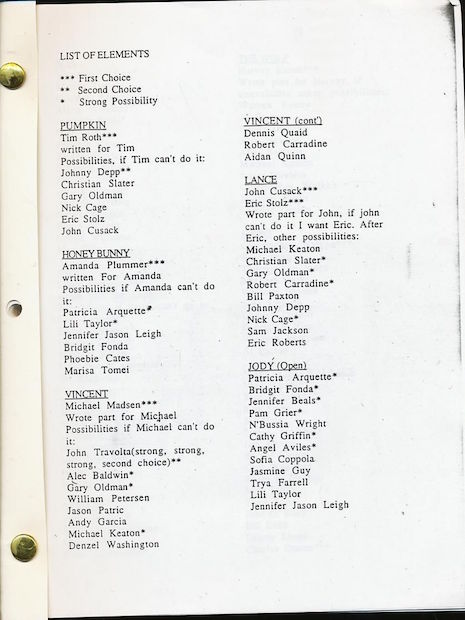 Quentin Tarantino cast John Travolta in Pulp Fiction because Michael Madsen, who had played Vic Vega in Reservoir Dogs, chose to appear in Kevin Costner’s Wyatt Earp instead. Tarantino had written the part with Samuel L. Jackson in mind, but the actor nearly lost it after his first audition was overshadowed by Paul Calderón. Jackson assumed the audition was merely a reading. Harvey Weinstein convinced Jackson to audition a second time, and his performance of the final diner scene won over Tarantino. Miramax favored Holly Hunter or Meg Ryan for the role. Alfre Woodard and Meg Tilly were also considered, but Tarantino wanted Uma Thurman after their first meeting. Bruce Willis’ appearance and physical presence were crucial to Tarantino’s interest in casting him: “Bruce has the look of a 50s actor. I can’t think of any other star that has that look.”