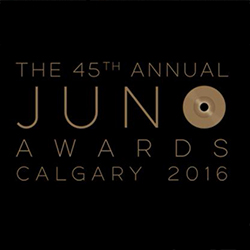 It was a victorious weekend for The Weeknd, who earned an outstanding total of five JUNO Awards during Canada’s 45th annual music awards in Calgary. The alternative R&B sensation scooped up two statuettes for Single of the Year and Album of the Year* during CTV’s live broadcast of THE 2016 JUNO AWARDS, Sunday, April 3 at the Scotiabank Saddledome. Having already won three awards for Artist of the Year, Songwriter of the Year* and R&B/Soul Recording of the Year during Saturday night’s JUNO Gala Dinner & Awards, he took home the most wins of any artist, as well as the most nominations, making him the JUNO juggernaut of 2016.

The Weeknd’s five JUNO Awards top off an exceptional year for the artist. The multiplatinum-selling artist also graced the broadcast stage on Sunday to perform a mesmerizing two-song medley of never-seen-before tracks “Aquainted” and “Might Not”, with surprise guest Belly.

Also during the broadcast, Alessia Cara was named Breakthrough Artist of the Year following major international success with her hit songs “Here” and “Wild Things”, which she performed to open the live show and mark her JUNO stage debut. Ontario’s multitalented five-piece band Walk Off The Earth was awarded Group of the Year.

Saturday night’s double-winner (Aboriginal Album of the Year, Contemporary Roots Album of the Year) Buffy Sainte-Marie took part in the broadcast with a unique spoken word performance, Breakthrough Group of the Year winners Dear Rouge performed “I Heard I Had”, and Whitehorse, winners of the Adult Alternative Album of the Year, delighted fans with their song “Tame as the Wild Ones”.

After snagging a big win for Country Album of the Year for his record Gypsy Road, Dean Brody also graced the stage with a special performance of “Bring Down the House”.

Emilie-Claire Barlow won her 2nd JUNO Award in the Jazz Album of the Year, Vocal, this time for her Clear Day release.