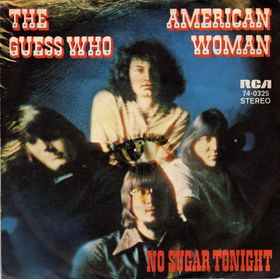 American Woman by Canadian rock band The Guess Who, was first released in January 1970 on the album of the same name and later in March as a single, which reached No. 1 on the Billboard Hot 100. Backed with “No Sugar Tonight,” Billboard ranked it as the No. 3 record of 1970.

Shortly after its release, The Guess Who were invited to play at the White House. Because of its supposed anti-American lyrics, Pat Nixon asked that they not play “American Woman”.