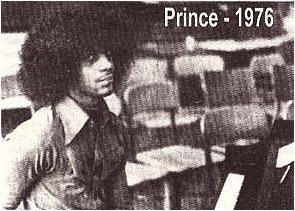 What follows is a transcript of Prince’s very first interview. It appeared in his high school newspaper on February 16, 1976, accompanied by a picture of a young afro-clad Prince sitting at a piano.

“I play with Grand Central Corporation. I’ve been playing with them for two years,” Prince Nelson, senior at Central, said. Prince started playing piano at age seven and guitar when he got out of eighth grade.

Prince was born in Minneapolis. When asked, he said, “I was born here, unfortunately.” Why? “I think it is very hard for a band to make it in this state, even if they’re good. Mainly because there aren’t any big record companies or studios in this state. I really feel that if we would have lived in Los Angeles or New York or some other big city, we would have gotten over by now.”

He plays several instruments, such as guitar, bass, all keyboards, and drums. He also sings sometimes, which he picked up recently. He played saxophone in seventh grade but gave it up. He regrets he did. He quit playing sax when school ended one summer. He never had time to practice sax anymore when he went back to school. He does not play in the school band. Why? “I really don’t have time to make the concerts.”

Prince has a brother that goes to Central whose name is Duane Nelson, who is more athletically enthusiastic. He plays on the basketball team and played on the football team. Duane is also a senior.

Prince plays by ear. “I’ve had about two lessons, but they didn’t help much. I think you’ll always be able to do what your ear tells you, so just think how great you’d be with lessons also,” he said.

“I advise anyone who wants to learn guitar to get a teacher unless they are very musically inclined. One should learn all their scales too. That is very important,” he continued.

Prince would also like to say that his band is in the process of recording an album containing songs they have composed. It should be released during the early part of the summer.

“Eventually I would like to go to college and start lessons again when I’m much older.”