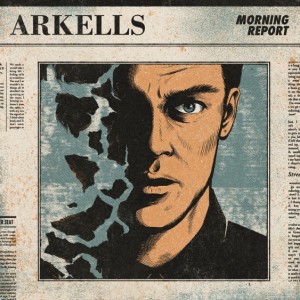 Hamilton’s hardest-working musical heroes Arkells return with their fourth studio album, Morning Report. Following two years to the day from the issuing of their gold-selling High Noon, Morning Report will be released August 5.

As the most-played band on Canadian Alt-Rock radio in 2015, Arkells have travelled extensively coast to coast via air, replicating same on the ground with near-ceaseless touring. Their reputation for passionate, high-energy Rock’n’Soul is firmly established; Morning Report will illuminate an even more irreverent, adventurous ethos that reflects lead singer-guitarist-chief songwriter Max Kerman’s present musical preoccupations.

“It’s a weird time to be a rock band right now,” observes Kerman. “Tony Hoffer (Beck, m83) once told us ‘Rock music has actually become the most conservative genre.’ Those words really struck me because he’s right. Sonically it hasn’t evolved much and lyrically it’s easy to get away without saying much either. In writing these songs we didn’t want to feel beholden to any expectations from the ‘rock godz’. If it didn’t feel fresh and exciting, it didn’t make the cut. We have no interest in making the same record twice. The most exciting part about making something new is trying different shit and exploring spaces we haven’t been to yet.”

It follows that Morning Report is comprised of click-tracked rhythms, subliminal samples, and electronic pulses – threaded together with horns and strings into a richly-textured mix which more readily recalls montage and collage approaches of Hip-Hop beatmakers than the direct plug-in-and-play attack of a live rock band. Lyrically, however, Kerman’s songwriting hits even closer to home on this album.

“Many of the songs are inspired by friends and family: I have a lot of interesting characters in my life and take a lot of joy in being able to write about them,” Kerman admits. “A lot of songs start from what happened the night before that’s where the title comes from: friends who text the next day and demand ‘Give me the morning report!’”

A special D2C package of Morning Report is also available to fans that includes a limited, coloured vinyl LP, a set of three litho prints, a pennant, t-shirt and a CD + digital album. Visit the Arkells online store here.

This summer the 4X JUNO Award-winners will hit the road for a string of festival performances leading into album release, including Bonnaroo, Firefly Music Festival, Pemberton Music Festival, WayHome Music and Arts Festival, Rock The Shores and Lollapalooza. For more information on Arkells’ performance dates and pre-order packages, visit: arkells.ca.