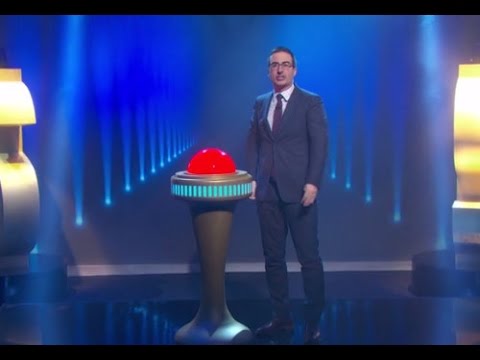 We can tell you about the growing problem of medical debt and how hospitals are suing thousands of patients for having the gall to be both sick and poor, or how debt collectors screw-up and use illegal tactics to get paid for debts they often can’t even prove that anyone owes. But that’s nothing compared to the site of a goofy English guy forgiving $15 million in medical debt he bought for pennies on the dollar.

If you’re a regular reader of Consumerist, much of what Oliver talks about is nothing news: Debt buyers purchase debt from creditors and other debt buyers. Sometimes that debt isn’t even owed, as the relevant statute of limitations has expired. If the alleged debtor begins making payments on those bills, it may resurrect the debt as so-called “zombie” debt.

Oliver says the zombie metaphor is “quite apt, because just like on The Walking Dead, zombie debt comes back from the grave, is incredibly hard to deal with, and seems to disproportionately impact minorities.”

Sometimes the debt buyers are buying nothing more than a name and a dollar figure, with little to no proof that the amount is correct or other evidence that the debt is still owed. However, because debt buyers pay so little for these lists of debtors, they only need to convince a small number of people to pay up in order to make their money back.

In more than half the states, you can legally buy debt without a license. In 17 states, you don’t even need a license to collect debts.

“There are places in this country where you need to fill out less paperwork to start collecting money from peoples’ pockets than you do to collect fish from a f*cking lake,” explains Oliver.

He continued: “It is pretty clear by now that debt-buying is a grimy business and badly needs more oversight. As it stands, any idiot can get into it, and I can prove that to you, because I’m an idiot and we started a debt-buying company… And it was disturbingly easy.”

CARPlogo
For a $50 fee, Oliver and his team registered their new debt-acquisition firm, Central Asset Recovery Professionals — CARP, named after the bottom-feeding fish — in Mississippi, complete with a website that was nothing more than the logo you see here.

“With little more to go on than that website,” says Oliver, “we were soon offered a portfolio of nearly $15 million of out-of-statute medical debt from Texas.”

The asking price was less than $60,000 for $14,922,261.76 in this zombie debt — or around $.004 for every dollar of debt owed. Purchasing the debt would give CARP the names, current addresses, Social Security numbers, and amount owed (or previously owed, as the statute of limitations had expired) for nearly 9,000 individuals.

“So, we bought it, which is absolutely terrifying,” admits Oliver. “Because it means if I wanted to, I could legally have CARP take possession of that list and have employees start calling people, turning their lives upside down over medical debt they no longer had to pay. There would be absolutely nothing wrong with that, except for the fact that absolutely everything is wrong with that.”

Thus, rather than try to collect on the debt, Oliver decided to stage the “largest one-time giveaway in television history,” nearly doubling the estimated value of that time Oprah gave everyone in her audience a new Pontiac G6, a moment that has been a gift for meme-makers, but didn’t do much to save the Pontiac brand.