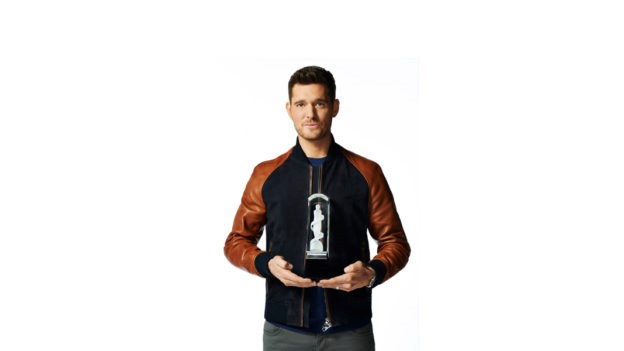 CTV and The Canadian Academy of Recording Arts and Sciences (CARAS) confirmed today that multi-Grammy and JUNO Award-winner Michael Bublé is set to take the reins as host of CTV’s broadcast of THE 2017 JUNO AWARDS, returning to the Nation’s Capital during the year-long celebrations marking the 150th anniversary of Confederation.

Bublé returns to the JUNO stage following his unforgettable performance as host at THE 2013 JUNO AWARDS in Regina, which garnered him the Canadian Screen Award for best Host in the Variety, Lifestyle, Reality/Competition, Performing Arts or Talk Program or Series. THE 2017 JUNO AWARDS airs live on CTV and CTV GO from the Canadian Tire Centre in Ottawa on Sunday, April 2.

“I’m just a kid from Burnaby, so to get the opportunity to host this incredible night in Canadian music, for the second time, is amazing,” said Michael Bublé.

The multi-platinum singer released his ninth studio album, Nobody But Me, on October 21, his first album in three years. It follows the critically acclaimed To Be Loved album which was his fourth album to reach #1 on Billboard’s Top 200 Charts. The exciting new collection of original pop tunes and beautiful standards highlights Bublé’s talent as a profound interpreter of the American songbook, as well as his gifted songwriting and producing style. Nobody But Me was recorded in Los Angeles and Vancouver and includes three new Bublé-penned originals, along with breathtaking reinventions of classics including “My Baby Just Cares For Me”, “The Very Thought of You”, Brian Wilson’s “God Only Knows”, and the Johnny Mercer-written classic “I Wanna Be Around”.

**Media Note** – Photos of THE 2017 JUNO AWARDS host are available at www.bellmediapr.ca/network/CTV and www.junoawards.ca.

Tickets for THE 2017 JUNO AWARDS go on sale this Saturday, Nov. 5 at 10 a.m. ET. Tickets are available starting at $39 through the Canadian Tire Centre Box Office, by phone at 1-877-788-3267 and online at ticketmaster.ca. The JUNO Awards has partnered with Plus 1 so that $1 from every ticket is donated to MusiCounts, helping to ensure that children and youth across Canada have access to musical instruments. Plus 1 is a non-profit that partners with touring artists to facilitate a $1 add-on from every concert ticket to go to a cause the artist partner believes in.

Additional performer and presenter announcements will be released in the coming months.