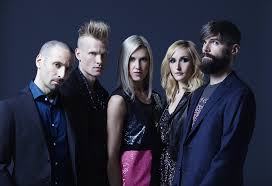 Vancouver-based alt-rockers, Mother Mother, today announced their 2017 Canadian headlining tour, which will kick off in Moncton, NB on February 23. The tour will see Mother Mother hitting twenty-five cities and travelling from coast-to-coast before wrapping in their hometown of Vancouver, BC with four nights at the historic Commodore Ballroom. Joining the band on tour from March 3 – 26 is American alternative indie and hip hop singer-songwriter, K. Flay. Tickets will go on sale to the general public on Friday, December 2 at 10am local time.

The Juno and MMVA nominated Vancouver-based band, comprised of Ryan Guldemond, Molly Guldemond, Jasmin Parkin, Mike Young, and Ali Siadat, earned critical acclaim with their first two outings Touch Up (2007) and O My Heart (2008). Their next two releases Eureka (2011) and The Sticks (2012) delivered the top 5 radio hits “The Stand”, “Bit By Bit” and “Let’s Fall In Love”, making the band the second most aired alternative act in Canada in 2012 and 2013. In 2014 they racked up more hits with “Get Out The Way”, “Monkey Tree” and “Modern Love” from their much-lauded record Very Good Bad Thing. Since then, they’ve garnered over 5 top ten singles on the alt rock charts, over 1.5 million streams on Spotify and over 1.3 million views on Youtube.

VIP packages are available November 25 at 11am EST and include a meet and greet and acoustic performance by the band, as well as an exclusive T-shirt design by Molly Guldemond. Visit www.mothermothervip.com for details.

“We are so very excited to take this new music on the road. It’s in this realm where the connection with our songs, our fans, and ourselves as musicians truly deepens. It’s where the circle completes itself,” comments frontman and creative force Ryan Guldemond.

On February 10, 2017 via Universal Music Canada, Mother Mother will be releasing their sixth studio album NO CULTURE. Co-produced by Brian Howes, Ryan Guldemond and Jason “JVP” Van Poederooyen, the new album delivers a timely statement underpinned by the belief that love wins in a society continuously nurturing a fear-based culture.

The pre-order is available now for NO CULTURE and features two instant grat tracks – one is their current single “The Drugs” and the other “Love Stuck” which, until today, has not been available for public consumption. There will also be a special pre-order package that comes with a limited edition clear vinyl copy of the record, four lithograph prints as well as a limited edition poster. Tickets, VIP packages, and pre-orders can be purchased via Mother Mother’s website mothermothersite.com.