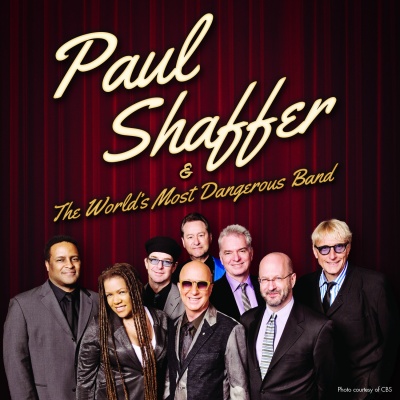 Paul Shaffer formed what soon became dubbed The World’s Most Dangerous Band back in 1982 and, for over three decades, they ruled the late night musical landscape. After a 24-year gap since their first album, “The World’s Most Dangerous Party” produced by Todd Rundgren, the eponymous PAUL SHAFFER & THE WORLD’S MOST DANGEROUS BAND features appearances by an all-star pan-demographic lineup including guest vocalists Dion, Jenny Lewis, Bill Murray, Darius Rucker, Shaggy, and Valerie Simpson. Shaffer and bandmates Will Lee and Felicia Collins round out the lead vocal duties.

PAUL SHAFFER & THE WORLD’S MOST DANGEROUS BAND will be available from Sire Records on March 17 on CD. The collection will also be released digitally. The group will tour behind the album with a string of shows that begins on April 1 in New York.

Shaffer played keyboards in the “Saturday Night Live” house band during the show’s paradigm-shifting first five seasons (becoming a featured on-camera player as well, e.g. his iconic impression of rock impresario Don Kirshner) before forming what Letterman soon named The World’s Most Dangerous Band in 1982 when he became musical director and sidekick on “Late Night With David Letterman.” After more than a decade on NBC, Shaffer and the band departed for CBS for a new show (“Late Show With David Letterman.” Although the band changed their name to “The CBS Orchestra”, the core lineup remained the same, adding Felicia Collins on guitar as well as a horn section.

All in all, Shaffer and the group spent over three decades living up to the band’s original name as they played to millions of television viewers five nights a week. Now, for the first time in 25 years, Shaffer and the band have re-claimed the moniker of The World’s Most Dangerous Band, recorded their first album together in 24 years, and will be embarking on a North American tour this spring in support of the release. Joining Shaffer are Felicia Collins (guitar), Anton Fig (drums), Will Lee (bass), and Sid McGinnis (guitar), with Tom Malone, Frank Greene, and Aaron Heick (horns).

“Getting to record with a band which has played together for several decades was magical. We’re so comfortable playing together, we finish each other’s licks!” says Shaffer. “The wonderful friends, old and new, who guested on vocals were a dream come true for us. They poured their hearts and souls into our music, and we thank them profusely.”

The new album was produced by Richard Gottehrer, whose career writing and producing music began in the early Sixties at the Brill Building, and executive produced by Seymour Stein. Together with Jerry Goldstein and Bob Feldman, Gottehrer wrote several massive hits, including “My Boyfriend’s Back” and “Hang On Sloopy.” The trio also wrote “Sorrow,” a song recorded by a number of artists, including David Bowie for his 1973 covers album, Pin Ups. On this album, singer Jenny Lewis joins the band for a heartfelt, tranquil version of the track, dedicated to Bowie.

Bill Murray has a long history with Shaffer, who played piano for his popular “Saturday Night Live” character Nick the Lounge Singer, and last year served as MC for the actor’s Netflix special “A Very Murray Christmas”, for which he received his fourth EMMY nomination. On the new album, Murray and Shaffer team up once again on a freewheeling romp through “Happy Street.”

The talented band puts a tropical spin on Vince Guaraldi’s Grammy-winning track “ Cast Your Fate To The Wind” with a little help from rapper Shaggy, and then switches gears to lay down a slinky groove for Darius Rucker’s cover of Timmy Thomas’ hit “Why Can’t We Live Together,” a song that’s been covered by everyone from Santana to Sade.