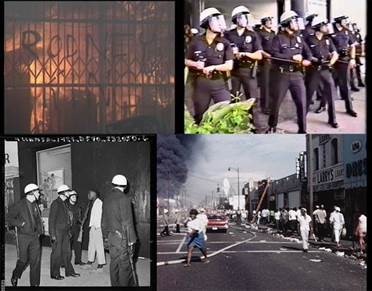 As the country prepares to commemorate the 25th anniversary of the 1992 Los Angeles uprising in April, SHOWTIME will premiere the new feature-length documentary BURN MOTHERF*CKER, BURN!, an in-depth and provocative look at a watershed moment that influenced the political, social and cultural fabric of the city of Los Angeles and the country. The 90-minute documentary will premiere on SHOWTIME on Friday, April 21 at 9 p.m. ET/PT.

Directed by Sacha Jenkins (Fresh Dressed), BURN MOTHERF*CKER, BURN! begins by exploring the complicated relationship between the Los Angeles Police Department and the city’s black and minority communities. The film traces a throughline from the 1962 ransacking of a Los Angeles Nation of Islam mosque (which left many injured and one man dead) to the 1965 Watts riots, the rise of L.A. street gangs in the 1970s and ’80s and the Rodney King beating in 1991. A year later, on April 29, 1992, four LAPD officers were acquitted by a Simi Valley jury on charges of assault, lighting the fuse for the uprising that began that evening and continued for days. Through the backdrop of these inflection points, the conflict is seen through the lens of three generations of local residents, community organizers, artists and influencers who lived through the uprising, illustrating the root causes, and the continued struggle for social justice. The films features interviews from a diverse group of Los Angelenos including: Danny Bakewell Sr., Rep. Karen Bass, LAPD Chief Charlie Beck, Jeff Chang, Perry Farrell, Everlast, B-Real, Cle “Bone” Sloan, KAM, YoYo, Dee Barnes, Norwood Fisher, Dee Dee McNeil, Aqeela Sherrills, Mike Davis, Connie Rice and Norma Mtume.

BURN MOTHERF*CKER, BURN! is produced and directed by Sacha Jenkins, and executive produced by Misha Louy on behalf of Mass Appeal.