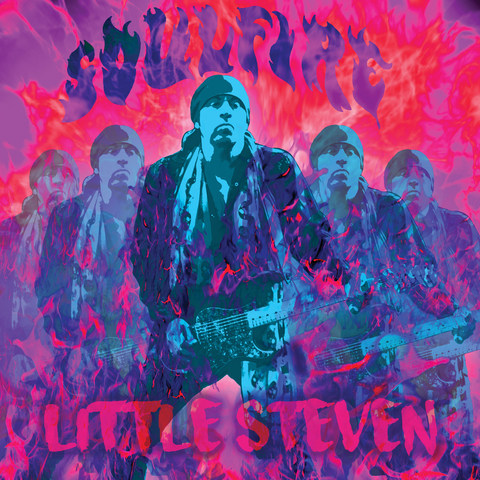 SOULFIRE will be available on CD, digitally and on vinyl as a double LP. Pre-order begins today, April 7 and will be accompanied by an instant grat download of the recently unveiled album track, “Saint Valentine’s Day.” Additional instant grat downloads will be unveiled in the coming weeks, including the blazing title track, “Soulfire.” Pre-order SOULFIRE here: https://UMe.lnk.to/LittleStevenSoulfire

“I’ve always been very thematic with my work, very conceptual,” Van Zandt says. “I need a big picture, I can’t just do a collection of songs, that doesn’t work for me. In this case, the concept became me. Who am I? I’m kind of my own genre at this point. So I tried to pick material that when you added it all up, really represented me. So there are a couple of covers, a couple of new songs, and some of what I feel are the best songs I’ve written and co-written over the years. This record is me doing me.”

Little Steven and The Disciples of Soul made their long awaited return last October, prompted by a friend’s request to perform at London’s BluesFest 2016. Van Zandt had only just returned home from The E Street Band’s summer stadium run but as luck would have it, his autumn plans already included a trip to the UK to celebrate both his wife’s birthday and his friend Bill Wyman’s 80th.

“It was perfect circumstances coming together,” says Van Zandt.

Little Steven quickly put together a Disciples of Soul for the 21st century, an “ever-changing group of misfits, rogues, and roustabouts” complete with three backing vocalists and a full horn section currently featuring original Asbury Jukes/Miami Horns saxophonists Stan Harrison (tenor) and Eddie Manion (baritone). Stevie and his 15-piece big band crossed the Atlantic and blew the roof off London’s indigo at The O2 with what was supposed to be just a “one-night-only” performance highlighted by classic hits like “I Don’t Want To Go Home,” solo favorites, songs written for other artists, and inventive covers of tracks made famous by Etta James, James Brown, and The Electric Flag.

With his usually packed schedule clear until The E Street Band’s “Summer ’17” tour of Australia/New Zealand, Van Zandt decided to strike while the iron – and his big band – was hot. SOULFIRE was arranged and produced by Van Zandt at his own Renegade Studios in New York City, co-produced and recorded by GRAMMY® Award-winner Geoff Sanoff (Fountains of Wayne, Stephen Colbert) and co-produced and music directed by guitarist Marc Ribler – the latter musician recruited by Stevie as Darlene Love’s music director for Love’s 2015 Van Zandt-produced INTRODUCING DARLENE LOVE and then “borrowed back” to serve that same role with The Disciples of Soul. Background vocals on “I Don’t Want To Go Home” and “The City Weeps Tonight” come courtesy of renowned a cappella group, The Persuasions. SOULFIRE was mixed and mastered by Van Zandt’s career-long collaborators and friends Bob Clearmountain (Rolling Stones, David Bowie, The Who, Bryan Adams), and Bob Ludwig (Led Zeppelin, Nirvana, The Band, Sly and the Family Stone).

“This was the most fun I’ve ever had making a record,” Van Zandt says. “We did it quickly, while we still had the fire and energy from the London show. We just took it into the studio and banged it out, six weeks from start to mix. It’s one of those strange things, it really seems like it was meant to be.”

Each of Van Zandt’s prior five solo albums had seen him expressing his utterly personal songwriting through a changing variety of sounds and approaches, an ambitious adventurousness that has fueled much of his creative output these past two decades. He expanded his parameters, as an actor on The Sopranos and Lilyhammer, as host, historian, and rock ‘n’ roll advocate on Sirius XM’s one-and-only “Little Steven’s Underground Garage” (not to mention creator of Sirius XM’s long-running “Outlaw Country” format). Van Zandt kept his skills sharp by composing the score for all three seasons of Lilyhammer and continued to work as producer and songwriter, lending his distinctive craft to records from an array of international garage rockers, but couldn’t kick a lingering sense of unfinished business.

“I felt a bit guilty about having walked away from Little Steven the artist,” he says. “I left that part of myself behind and I shouldn’t have done that. I let the material down by not continuing to perform it,” he says. “I betrayed the work and I want to fix that. I didn’t give up on the material – there were a lot of other factors – but I do have a sense of wanting some redemption for it.”

Van Zandt – who will remain a touring and recording member of The E Street Band – is now looking forward to hitting the road with his own big band. Little Steven and the Disciples of Soul will celebrate SOULFIRE with an epic international tour schedule, set to begin April 22nd with an eagerly anticipated return to Asbury Park, NJ’s historic Paramount Theatre and then continue with headline gigs and festival dates around the world. A full-scale North American headline tour will be announced soon – for regular updates and ticket information, please visit http://littlesteven.com/index.php/tour-dates.

“I want to take this band to every place that wants to see us,” Van Zandt says. “It’s tricky with a 15-piece band, but I’m just trying to achieve my lifelong goal of breaking even!”

Six solo albums and countless milestones in, Stevie Van Zandt has fully captured the singular vision he has refined and pushed forward for the length and breadth of his life and already brilliant career. SOULFIRE marks the much-needed return of a truly great artist, reenergized and unstoppable.

“I’m back into it,” Little Steven says. “And this time I’m going to stay back.”

TRACK BY TRACK BELOW: