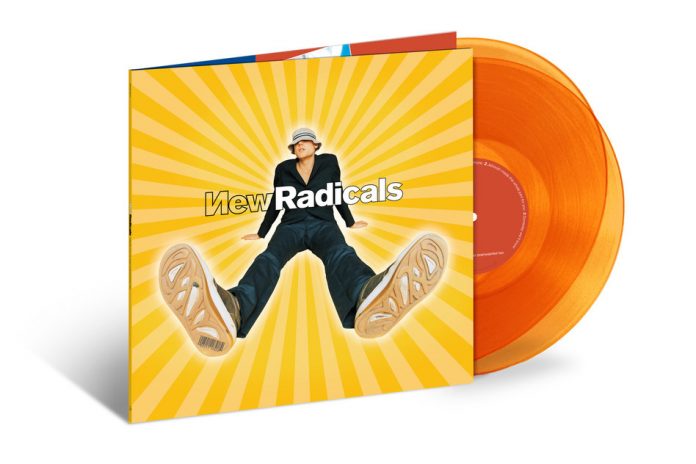 ew Radicals were an American alternative band formed by singer-songwriter Gregg Alexander. Maybe You’ve Been Brainwashed Too, the 1998 MCA Records release – featuring the hit single “You Get What You Give” – is now being reissued by Interscope/UMe on vinyl for the first time as a 2-LP set – with an additional, exclusive color edition in translucent gold — on August 4.

After a pair of late-’80s, early-’90s solo albums, Alexander put together a group with a wide range of collaborators including Danielle Brisebois, best known for her roles in All in the Family, as well as future Paul McCartney guitarist Rusty Anderson, and “Thriller” keyboardist Greg Phillinganes to form the band and record Maybe You’ve Been Brainwashed Too. The band’s rock-pop-funk, blue-eyed soul hybrid, which was released on October 20, 1998, was praised by critics, who said it had its own “unique, oddball bounce” and compared it to Todd Rundgren, and Prince, among others.

The album went platinum in America, and proved even more popular around the world, cracking the top 10 in the U.K. as well as many other territories. The first single, “You Get What You Give,” was a smash hit on the Billboard Hot 100, topped the charts in Canada and New Zealand and was in the Top 5 in the U.K. In addition to its success on the Pop Radio charts, the song also crossed music genres and peaked in the top 10 of the Billboard Modern Rock chart.

Like much of the rest of the politically charged, sex-and-drugs-infused lyrics, “You Get What You Give” took on health insurance fraud, big-bank corruption and the threat of technology while cheekily name-checking “fashion shoots with Beck and Hanson, Courtney Love and Marilyn Manson,” insisting, “You’re all fakes, run to your mansions/Come around, we’ll kick your ass in.”

The song has been praised by the likes of U2’s The Edge, who told Time magazine he “really would have loved to have written [it],” while Joni Mitchell cited it in the liner notes of her 2004 compilation, Artist’s Choice, praising it for “rising from the swamp of ‘McMusic’ like a flower of hope.” Rolling Stone named “You Get What You Give” one of the 50 Best Songs of the Nineties, VH1 voted it one of the “100 Greatest Songs of the ’90s,” while Pitchfork, Entertainment Weekly and Spin all dubbed it one of the top tracks of the decade as well.

Before the second single “Someday We’ll Know” was released in 1999, the band had broken up. The song was later covered by the group America, as well as Mandy Moore and Switchfoot’s Jon Foreman on the 2002 soundtrack to A Walk to Remember. Hall & Oates also covered the track on their 2003 album, Do It for Love, with a special appearance by Todd Rundgren.

After New Radicals, Alexander concentrated on production and songwriting, and continued to successfully write hits — but for other artists. In 2002, Alexander won a GRAMMY® Award for co-writing Santana’s top 5 hit “The Game of Love” featuring Michelle Branch. Alexander also co-wrote the songs for Once director John Carney’s 2014 film, Begin Again, with Alexander earning a Best Original Song Academy Award® nomination for “Lost Stars” with Brisebois. He’s also written and produced songs for Tina Turner, Cee-Lo, Rod Stewart, Rivers Cuomo, and The Struts, earning praise from Allmusic’s Stephen Thomas Erlewine who called Alexander “the catchiest, smartest professional mainstream pop songwriter of the early 2000s.” Maybe You’ve Been Brainwashed Too serves as the finest example of that talent.

Disc One/Side One
1. Mother We Just Can’t Get Enough
2. You Get What You Give
3. I Hope I Didn’t Just Give Away the Ending

Disc One/Side Two
4. I Don’t Wanna Die Anymore
5. Jehovah Made This Whole Joint for You
6. Somebody We’ll Know (Album version)

Disc Two/Side One
7. Maybe You’ve Been Brainwashed Too
8. In Need of a Miracle
9. Gotta Stay High