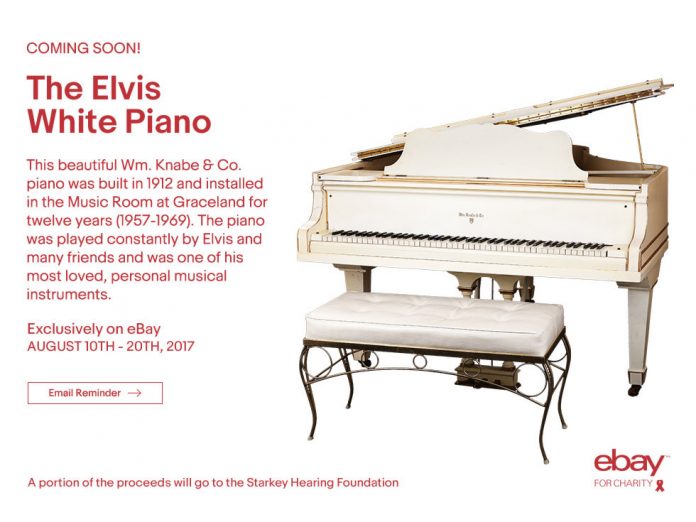 Forty years after Elvis Presley’s death, his famous white grand piano is up for auction on eBay from August 10-20. The piano, which stood in the Graceland music room for more than a decade, is expected to sell for millions. Ten percent of the proceeds from the Elvis White Piano, as the auction is listed on eBay, will go to Starkey Hearing Foundation which supports hearing health initiatives around the world.

Originally built in 1912 by Wm. Knabe & Co., the grand piano is one of the most important musical instruments in rock ‘n’ roll history. Prior to its home at Graceland, the piano was housed in Ellis Auditorium and played by musical greats including W.C. Handy, Count Basie, Duke Ellington, Cab Calloway and many others. As the heart and soul of Presley’s music room from 1957-1969, the piano was played by Presley and his many friends for practice sessions and friendly sing alongs.

The piano is expected to draw music aficionados and collectors from all over the world. For more information on the piano, visit www.elvispiano.com. Bidding starts on eBay on August 10 at 8:00 p.m. EDT and closes at 8:00 p.m. EDT on August 20.