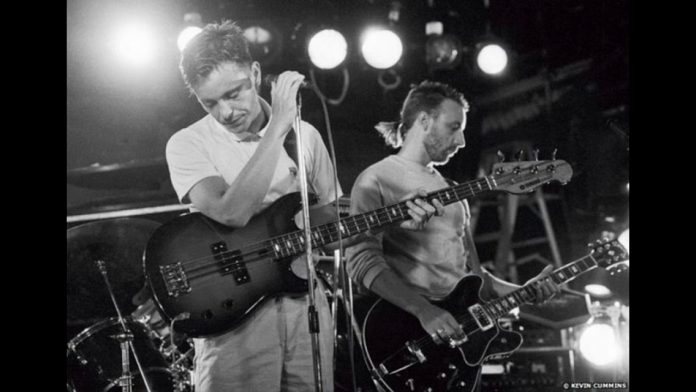 Let’s go back to New Order’s first show in Chicago. This one gig has become the stuff of legend. On June 30, 1983, the group is performing at the Cabaret Metro, and it’s hot in there. Like, so dripping-with-sweat that Bassist Peter Hook, in his memoir “Substance: Inside New Order,” calls it “one of the hottest gigs I have ever done,” and with the on-stage temperature at 118 degrees Fahrenheit. “Even Gillian (Gilbert) was sweating,” Hook writes.

Known as the lost New Order show not available for anyone to listen to until now, the group playing Blue Monday unplugged makes it worthwhile. It comes from someone named A.L., and there’s also a track list.

“Several months ago, I had gotten into a discussion via a Facebook comment thread with a Chicago person who claimed to have a tape of New Order’s debut Chicago gig June 30, 1983 at the legendary Cabaret Metro. For background, there are two New Order sets which have long been held up as the Holy Grails of New Order tapes – this show, and their debut Beach Club performance from 1980. For 34 years, no known tape of this Chicago set had been known to exist and all discussion was essentially conjecture and long-diminished memories from club owners and punters who attended. As I had already made arrangements to be in Chicago for the weekend described up top, I made separate arrangements to meet up with this person and pick up a copy of this set. If I’m to be honest, I didn’t expect it to be much of anything. So, that Saturday two weeks ago, I did. Turns out to have been with a lovely fellow who had several entertaining stories to share about gigs and particularly this recording.

The minute I put the CD-R into the rental car’s CD player, I knew it was special.

It’s not often something like this sort of falls in your lap.

June 30, 1983 was the hottest day of the year to date in Chicago. The now-legendary venue Metro – then known as Cabaret Metro – had been open for roughly a year. While I was just an 11 year old kid cavorting on a beach across Lake Michigan from Chicago that day – or most likely asleep in the summer cottage, considering the time – New Order finally made their debut appearance in Chicago. Attendees say it was unbearably hot inside the Metro that night. And allegedly even hotter on the stage. That day, the high temperature reached near 100° F in Chicago and it had barely cooled as the evening went on. Making matters worse, the band took nearly two hours to get on stage after the opening act, which made an uncomfortable and stinky audience even more strident.

The set starts out as your typical New Order set of the era would. Things seem OK, maybe a bit rowdier crowd than normal, until late in the fourth song “Truth” when the sequencer starts to act up. They launch straight into “Leave Me Alone” which ends uneventfully. Then, the power goes out (as you’d have it). A restless crowd begins complaining amongst itself, with audible complaints about sweat dripping into eyes, another mentioning rubbing ice all over their face, and vocalized thankfulness that they brought paper towels in. Random sequencer bleats punctuate the rumbling crowd, as the roadies and venue staff try to get the power sorted. Hooky mentions needing a shower. Eventually, “Your Silent Face” starts. It devolves into a unique and fascinating exposition on what a sequencer-using band does when the sequencers are failing mid song – Steve Morris jumps behind the drum kit far earlier than usual, and essentially drives the song to its skittering end as the sequencers never recover. I think this take is spectacular and I think you’ll agree.

Barney then makes reference on stage to equipment and power problems, mentions the band’s just going to jam, and Steve then pounds out the drum riff for “Denial”. Instead of jamming, the band then finishes the set with four straight sequencer-free tracks, ending on the majestic “In A Lonely Place” well into the wee hours of the morning.

There is no jamming, no acoustic “Blue Monday” despite the venue owner’s misremembered statements made over the years since. It’s possible of course at some point these did exist and were edited out from this tape upstream, but I doubt it and all other recollections of this gig fail to mention any acoustic “Blue Monday” performances.

For the past 34 years, this set has been legendary in the New Order community due to the circumstances which befell it. And a tape was never known to exist, nor a setlist for that matter. With the 1980 Beach Club set, it was part of the Holy Grail pair of lost New Order sets. That changes today. The story of how this tape ultimately came to me is nearly as good as the story behind the gig, but to protect privacy I shall simply thank A. for this. I believe this is from a 1st generation dub of the master, and whomever the actual taper is remains a complete mystery.”