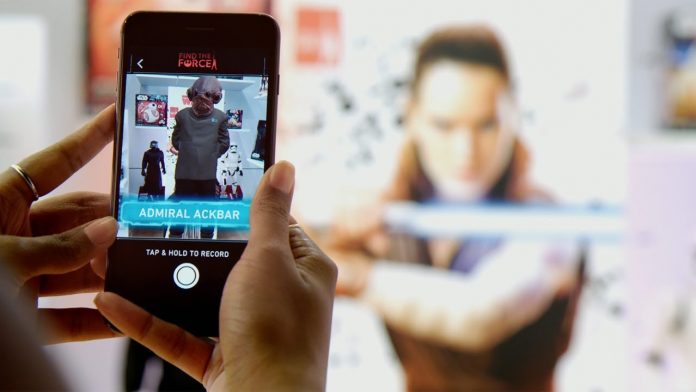 The pop-up AR treasure hunt aims to unite fans around the world in the battle against the dark side in a unique three-day event at over 20,000 retail locations across 30 countries. As fans turn up to take home new The Last Jedi products, they will have the opportunity to activate a unique augmented reality experience featuring Star Wars characters, including fan-favorites and new surprise additions from the film.

From September 1-3, retailers around the world will invite fans to Find the Force by taking part in an AR treasure hunt. Here’s how it works: first, download the Star Wars App, which is your one-stop-shop for all things Star Wars (those who already have the app will need to download the latest version). Then, visit any one of 20,000 participating retail locations to find a graphic that contains the Find the Force logo. When you scan the graphic using the Star Wars App, you’ll reveal a character, who through augmented reality, will appear in the room with you. You can then take photos, record videos, and share the experience on social media.

Fans can download the latest version of the Star Wars App (v. 2.3 or higher) beginning Aug. 24 for an early look at the new Porg characters in AR before the AR treasure hunt goes live at retail.

By sharing photos or videos featuring the in-store AR characters on Twitter or Instagram using #FindtheForce and #Sweepstakes throughout Force Friday II weekend, fans in select global markets can participate in a sweepstakes for the chance to win the ultimate fan experience: tickets to the Star Wars: The Last Jedi premiere in December.

I had a chance to check out the products at Fan Expo Canada 2017 with other very enthusiastic media and hardcore fans. We all know Disney and Lucasfilm stands for trustworthy, kid (and adult)-focused content of the highest quality, full of educational lessons, interactive items, and attention-grabbing media elements. The virtual playworld has just become that much smarter, and better, with Star Wars: The Last Jedi collection.

Check out what I posted on Instagram for more details about the new products!

The First Order Heavy Scout Walker from #StarWars allows you to push and see the crawling legs start to move. #FindTheForce #ForceFriday

It's LEGO's First Order Star Destroyer! Fire the stud shooters, then open the panels to play inside. #ForceFriday #FindTheForce #StarWars

Own your very own LEGO BB-8! Turn the wheel to spin the head and turn another to open the hatch, out comes the welding torch! #ForceFriday #FindTheForce #StarWars

Force Link gives kids the sound effects and phrases from the #StarWars movies right in their palms of the hands. #ForceFriday #FindTheForce

Explore the Star Wars galaxy through holographic simulations with the new Sphero App-Enabled Droids app and new accessory – the Droid Trainer. Place your BB-8 or BB-9 droid in the trainer, open the app, point your device at the droid and begin the adventure. #ForceFriday #FindTheForce #StarWars

BB-9 is a menacing astromech droid of the First Order. Control it with your smart device and keep it rolling optimally with the augmented reality Droid Trainer! This is NOT the droid you're looking for…it's the droid that's looking for you.  #ForceFriday #FindTheForce #StarWars #BB9

The new R2-D2 astromech droid from a galaxy far, far away. Control your droid with your smart device or keep Artoo in top shape with augmented reality. #ForceFriday #FindTheForce #StarWars